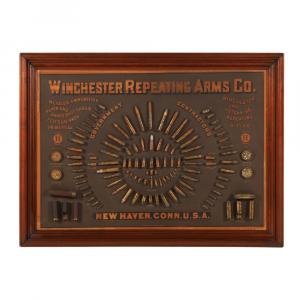 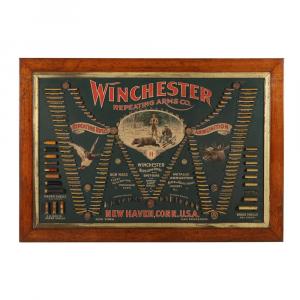 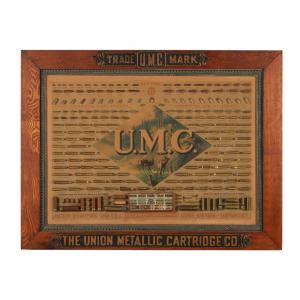 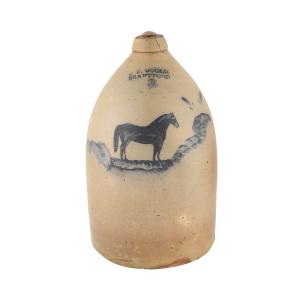 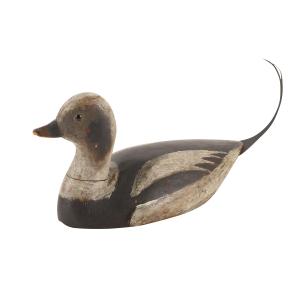 Rare and important early gunning longtailed duck, circa 1880s-1940s, likely made by either Jimmy or William Clark of Toronto and Keswick, Ontario (CA$8,260).

I interviewed Don Blyth three days before his death. What he had was museum quality material. I asked him, ‘Why did you not donate it?’ He said, ‘Let the people enjoy it.’”
— Ethan Miller

All prices quoted in this report are in Canadian dollars.

The abovementioned cartridge display boards were the top lots of the auction. All three were lithographed cardboard, with an applied representation of Winchester’s line of ammunition. Few survived intact due to their monumental size and the fact they were often displayed in store windows and areas exposed to light. They are highly prized by collectors.

The auction was headlined by the lifetime collections of Don and Joyce Blyth – an astounding assemblage of stoneware, sporting advertising, decoys, powder tins, soda water bottles, ginger beer bottles, beer bottles, Canadiana and more. In all, 289 lots came up for bid, with 99 percent of them finding new owners. Over half of the lots sold met or exceeded their pre-sale estimates.

Don and Joyce Blyth were both avid collectors until Don’s recent passing. Included in the auction was a nearly comprehensive collection of Guelph merchant stoneware and bottles, among other pieces of Guelph, Ontario memorabilia. Also on offer were Don’s collections of Canadian gun powder tins, decoys, sporting and firearms advertising and other items.

“I interviewed Don three days before his death,” said Ethan Miller of Miller & Miller Auctions, Ltd. “What he had was museum quality material. I asked him, ‘Why did you not donate it?’ He said, ‘Let the people enjoy it.’ His intention has now been realized. The stoneware pieces sold strongly, and the rarest of the offering crushed the high estimates. All in all, it was a great sale.”

Joyce Blyth, who survives her husband and who attended the auction, said, “Never in our wildest dreams did we think that the cartridge boards had such value. Don would have been thrilled.”

Following are additional highlights from the auction. Internet bidding was facilitated by LiveAuctioneers.com and the Miller & Miller website: www.MillerandMillerAuctions.com. A total of 321 registered bidders placed 5,838 bids. Thirty percent of all lots sold surpassed even their high estimate figures. All prices quoted are inclusive of an 18 percent buyer’s premium.

Stoneware was led by a rare three-gallon jug produced in the 1870s by F. P. Goold and featuring a race horse decoration in cobalt slip. It was made during Goold’s tenure at the Brantford pottery in Canada ($20,060). Also, a two-gallon jug debossed, “Robt. Rutherford Guelph”, boasting an outstanding bird decoration, gaveled for $7,080. The jug appears on the cover of Joyce Blyth’s book, Jugs & Crocks of the Guelph Merchants.

Tops in the decoys category was a rare and important early gunning longtailed duck, circa 1880s-1940s, likely made by either Jimmy or William Clark of Toronto and Keswick, Ontario ($8,260); and a first quarter 20th century Burlington Bay canvasback by Ivar Gustav Fernlund (Hamilton, Ont., 1881-1933), hollow, with a structurally excellent bottom board, beautiful wet combed paint and a bold and elegant high head ($7,670).

A first quarter 20th century hollow bluebill decoy by Henry (Hen) Freeborn (Hamilton, Ont., 1882-1959), in excellent gunning condition with strong paint and winner of a CDOCA Best Bluebill contest, fetched $4,720. The bottles category was led by a W. Atkinson, Guelph C.W. (Canada West) primitive pint stone ginger beer bottle, believed to be the only one in existence and made sometime in the late 19th century, sold for $4,130.

Returning to sporting collectibles, a Canadian Dominion Cartridge Company exhibition board, wood with applied ammunition, reportedly made for a display at the 1901 Pan-American Exhibition in Buffalo, N.Y., achieved $9,440; and a 1902 American Winchester double “W” cartridge display board, featuring detailed lithographed images of the ammunition instead of the applied cartridges, 39 ¾ inches by 57 ½ inches, hit $8,260.

An early 20th century Canadian Dominion Ammunition store counter display made from painted chalkware, originally from the Bright, Ontario general store, marked “Petrucci Freres Statuaires Montreal”, sold for $6,490. Also, two Stelco Sample Shot display cases, one from the 1930s and one from the 1950s, both displaying the various sizes of lead shot manufactured by The Steel Company of Canada, Ltd. (Stelco), knocked down for $3,835.

Miller & Miller Auctions, Ltd. has two more auctions planned for June: a Watches & Jewels auction on Saturday, June 12th and an Advertising & Breweriana auction on June 19th. Both will be online-only. In the fall, a Canadiana & Historic Objects auction is planned for October 9th.

Miller & Miller Auctions, Ltd. is Canada’s trusted seller of high-value collections and is always accepting quality consignments. The firm specializes in watches and jewelry, art, antiques and high-value collectibles. Its mission is to provide collectors with a trusted place to buy and sell.

To consign a single piece, an estate or a collection, you may call them at (519) 573-3710; or, you can e-mail them at info@millerandmillerauctions.com. To learn more about Miller & Miller Auctions, Ltd., please visit www.MillerandMillerAuctions.com. Updates are posted frequently.