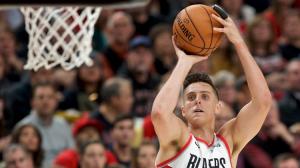 Show highlights include Zach Collins exploring his gaming skills in “Red Dead Redemption 2,” and discussing his early love of Star Wars “Revenge of the Sith” game.

Show highlights include Collins exploring his gaming skills in “Red Dead Redemption 2,”
and discussing his early love of Star Wars “Revenge of the Sith” game

IRVINE, CALIFORNIA, UNITED STATES, April 7, 2021 /EINPresswire.com/ — Already living his NBA dream as a power forward for the Portland Trailblazers, the competition doesn’t end there for Zach Collins who is also a gaming trailblazer off the court.

An avid gamer, Collins enjoys exploring the virtual worlds of his favorite video games “Call of Duty” and “NBA2K,” and fantasy-related games, movies, and TV shows, including “Lord of the Rings,” “Game of Thrones,” and “Star Wars.”

Some of the topics covered in Cochran’s interview with Collins include:

• how he makes three-pointers look easy,
• his thoughts on his alma mater Gonzaga University’s title bid in the NCAA men’s basketball tournament,
• the gaming scene during his college days,
• how his grandmother giving him an Xbox to use during his visits to her house was a key influence on his becoming a gaming enthusiast,
• his favorite video games when growing up,
• how he annoyed his parents with his “Guitar Hero” obsession,
• his early love of the “Star Wars: “Episode III – Revenge of the Sith” game and the prequel movies,
• why Heath Ledger’s Joker is his favorite on-screen villain,
• how he would design a version of “Grand Theft Auto” set in his hometown of Las Vegas,
• why he is a Harry Potter fan and how he is looking forward to the upcoming “Hogwarts Legacy” game,
• if he misses the desert while living in Portland,
• and how high can he jump.

In an exciting gameplay show finale, Collins and Cochran team up to visit a virtual American Southwest in “Red Dead Redemption 2.” Don’t miss all the humorous and gaming fun as they engage in thrilling gunfights and try to rob a train. Collins and Cochran also weigh in with informative game reviews.

Drafted 10th overall in the 2017 NBA Draft by the Trailblazers, the 7-foot, 250-pound Collins has shown promise during his career despite struggling with injuries.

He had missed most of the 2019-20 season after having left shoulder surgery, but he returned for the NBA’s restart in the bubble in Florida and helped the Blazers reach the Western Conference playoffs with a play-in victory over the Memphis Grizzlies. In the opening round series against the eventual NBA champion Los Angeles Lakers, Collins suffered a season-ending left ankle injury. Collins had averaged seven points and 6.3 rebounds in 11 games during the 2019-20 season. He finished 8th in the league in blocked shots.

Previously, Collins was a star college player at Gonzaga University, helping the Bulldogs to their first NCAA national championship game in the 2016-17 season. Collins was named to the 2017 NCAA All-Tournament team, while also leading the West Coast Conference in blocked shots as well as field goal shooting percentage.

Off the court, Collins enjoys spending time with his friends and family back home in Las Vegas. He also has a strong interest in cars, music, in addition to his love of video games.

“As a first of its kind, The Gamer Hour celebrates the convergence of traditional sports, music, comedy, and acting with esports and gaming. If you enjoy hearing about celebrities that have grown up with gaming, and who lead interesting busy lives, The Gamer Hour is a must-see and share show,” said Mark Thimmig, chairman, CEO of Esportz Network.

The Gamer Hour, which is filmed at the iconic New York City Times Square Reuters studio and produced by Reuters Broadcast Solutions and Esportz Network, is available globally on Fite.TV, (https://www.fite.tv/vl/p/esportz-network/), and more than 50 media distribution platforms.

The Gamer Hour, airing on Tuesdays at 6 p.m. PST, features interviews with celebrities from traditional sports, musicians, comedians, and movie stars that enjoy gaming. This show was designed to meet the ever-increasing demand for high-quality, fun, and compelling video-on-demand esports and gaming programming.

Fans can view the show and follow upcoming guests and showtimes on The Gamer Hour website and through social media including its popular Tik Tok page, (https://www.tiktok.com/@gamerhourshow).

Those interested in becoming a show sponsor for The Gamer Hour, appearing as a show guest, or investing please reach out to Esportz Network at info@esportznetwork.com.

Esportz Entertainment Corp. is located at the epicenter of esports, surrounded by hundreds of the greatest names in game development, arenas, tournament play, and those who drive the global esports industry. Esportz Entertainment Corp. through its Esportz Network, (https://www.esportznetwork.com), one of the largest global esports news organizations with over 90 reporters, photographers, videographers around the world, and a Reuters global partner for esports, is covering esports leagues, teams, athletes, along with the people and the companies behind the sport in a manner that matches the excitement and rapid global growth of esports. Esportz Network is developing additional high-quality programming directed to the broader esports /gaming audience and communities.