AMCD Calls for UN Peacekeepers to Redeploy in Darfur

AMCD Calls for UN Peacekeepers to Redeploy in Darfur 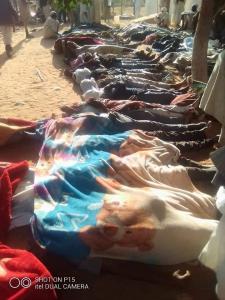 Victims in the town of Tuwail in the South Darfur Region. A large number of RSF/Janjaweed militias in civilian clothes riding horses, camels, motor-cycles and pickup trucks attacked the town on January 20, 2021. (photo provided by Muhammed Umar of AMSED)

WASHINGTON, DC, USA, April 8, 2021 /EINPresswire.com/ — The American Mideast Coalition for Democracy calls for the mandate of the United Nations-African Union Hybrid Operation in Darfur (UNAMID) to be renewed following violent attacks by Arab Janjaweed militias on the black African Masalit tribe in the Darfur region of Sudan.

At least 129 people were killed and military reinforcements were brought into El Geneina, capital of West Darfur, just after international peacekeepers were withdrawn in January. Over Easter weekend, it was reported that 18 people were killed and another 54 were injured in attacks using mortars, rocket-propelled grenades and machine guns that the former Bashir government had provided the jihadists. We have also seen reports that the numbers of those killed and injured over the weekend are much higher.

“In view of the fact that jihad attacks are heating up again in Darfur, the UN needs to reconsider its decision to withdraw troops,” suggested AMCD co-chair Tom Harb. “Jihadists cannot be allowed to attack the defenseless civilian population with impunity.”

“As of today, the attack is still ongoing,” explained AMCD co-chair John Hajjar. “The old Janjaweed militias seem to be reforming and continuing their jihad in Darfur despite the Juba Peace Agreement. Unfortunately, the government sent the wrong message by releasing the Janjaweed militia commander, Musa Hilal, from prison last month.”

“President Bashir has been removed from power, yet his militias still in control of the government in Sudan,” explained General Abakar Mahamat Abdallah of the United Sudan Movement. “They continue to commit genocide, war crimes and human right abuses against the undefended population of Darfur. In addition to atrocious crimes they commit against the people, the Rapid Support Forces/Janjaweed (RSF/Janjaweed) militias enrich themselves from villagers as well. They kidnap people for ransom, women for sexual exploitation, and abduct children for slavery. Moreover, the militias engage in expropriation of land, pillage and plunder the villages, graze animals on farms and seize livestock. Fearing for their lives, the villagers flee to the Internally Displaced Peoples (IDP) camps, waiting for international relief supplies to survive. Unfortunately, the militias continually attack the IDP camps to disperse the undefended vulnerable populations. The Transitional Sovereignty Council is doing nothing to protect people since the Rapid Support Forces/Janjaweed militias are part of its security forces.”

“It is typical of jihadist groups to sign cease-fire agreements when they are weak and then to disregard them as soon as they are strong enough to launch attacks,” added Hossein Khorram. “It’s clear the government is not yet strong enough to end this violence permanently and so UNAMID needs to be brought back as soon as possible.”

“The attacks in the state of Western Darfur (or Darmasalit) are a complete violation of human rights,” stated Daowd Salih, Co-Founder & Board President of Damanga Coalition for Freedom and Democracy. “The Sudanese transitional government needs to be held accountable. As an advocate who’s been speaking out against the genocide since 1999, it disheartens me that the marginalization and ethnic cleansing of my people continues. It is imperative the international community provide protection in the region of Western Darfur. We urge the U.S. government and other Western powers to intervene and hold the Sudanese government accountable.”

AMCD condemns the ongoing jihadist violence in Sudan, Nigeria and other areas of Africa. The US has several small operations on the continent to help put down these jihadist insurgencies, but clearly, much more needs to be done. We call on the UN to intervene in order to protect innocent civilians in Darfur once again.

For further information or to find out how to help the suffering people of Darfur, please contact:

Co-Founder & Board President of Damanga Coalition for Freedom and Democracy