Announcing early lineup for Best Music, up for $45,000 in awards. Judges from Grammys, BMI & more

Announcing early lineup for Best Music, up for $45,000 in awards. Judges from Grammys, BMI & more 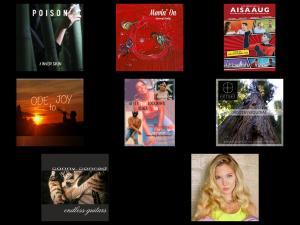 The original music nominees are Roots-Sequoia, Movin’ On, Endless Guitars, Ode to Joy, An Interesting Story About an Uninteresting Guy and After the Lockdown.

-From United Kingdom, Artist emaé would see her family move from Scotland to England, Zambia, Zimbabwe and Botswana before settling in London. She created Roots-Sequoia, a feel-good blend of soul-pop, as a fusion of all the cultures that embraced her and the places she’s called home.

-When Samarah Conley (USA) was eleven years old she was feeling sad and wrote Movin’ On. The chorus was created in the studio with producer Len Monachello.

– Endless Guitars is from the internationally award-winning anniversary album “The World Anthem” by Artist Conny Conrad of Germany.

– From Conductor Taras Kutsenko, Ode to Joy was born out of a great desire to unite during the pandemic. Musicians from (China, Monaco, Spain, Ukraine) recorded their videos on mobile & sound engineers worked with this material to create a full-fledged studio sound.

– From composer Donny Walker (USA) An Interesting Story About an Uninteresting Guy features over 70 Chicago based musicians.

– The Music Series recently released on The Media Futurists Podcast include
Musicians Series, Episode 3: – Samarah Conley, 13-year-old singer, songwriter and actor, released her newest single “Movin’ On” in 2020. Samarah wrote her first song when she was just five years old and has a bright future in the music and entertainment industry. Here we discuss the future of Samarah’s career, her inspiration for “Movin’ On” and her favorite types of music to listen to.
https://soundcloud.com/user-135482983/musicians-series-episode-3-samarah-conley

-Musicians Series, Episode 2: – Heavenly Reyna is a 20-year-old singer, songwriter and actor. She began traveling the world with her family at just five years old and started her career in the music and entertainment industry at a young age. Heavenly and I discuss her newfound love of Twitch streaming, her songwriting process and her cameo in an Ariana Grande music video.
https://soundcloud.com/user-135482983/musicians-series-episode-2-heavenly-reyna

-Musicians Series, Episode 1: – Giorgio Ranciaro, drummer for Italian band Inner Skin, is the director of Inner Skin’s “Poison” music video. Inspired by the animal fable about the scorpion and frog who cross a river together, “Poison” tells the story of a mysterious scorpion woman. In this episode we discuss the inspiration and meaning behind the music video and Inner Skin’s creative process.
https://soundcloud.com/user-135482983/musicians-series-episode-1-giorgio-ranciaro

The 12th Annual New Media Film Festival® is set for June 2 & 3 2021.
Submissions are accepted through April 3, 2021. A complete list of the early lineup nominees can be found here https://www.newmediafilmfestival.com/events-2/
ABOUT – New Media Film Festival® is an innovative and award-winning festival created in 2009 to celebrate global stories, technology, and platforms. The goal of the festival is to bring the world the Best in New Media, honoring stories worth telling of emerging and established video and new media artists throughout the world. www.newmediafilmfestival.com a multiple award winning festival.