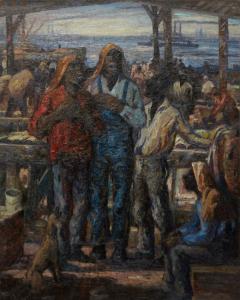 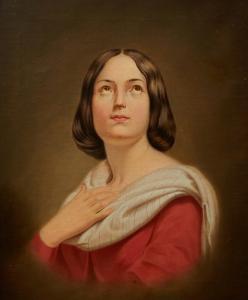 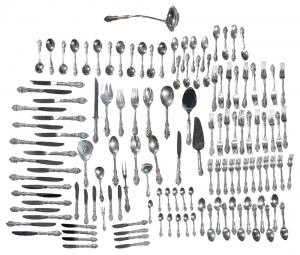 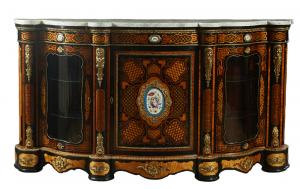 The auction, totaling 752 lots across the two days, will feature property from the collection of Nicholas Burke (1834-1905), formerly of 5809 St. Charles Avenue in New Orleans (The Wedding Cake House), by descent to the present consignor; the estate of Dr. Sue LeBlanc in Hammond, La.; Lower Garden District and distinguished Garden District collectors; and other fine items pulled from prominent estates and collections throughout the region.

The 129-piece set of sterling flatware by Gorham in the La Scala pattern was designed in 1964 by Richard Gavette (1930-2018) and has a total weight of 178.7 troy oz. (est. $2,500-$4,500). Vintage jewelry from the estate of Dr. Sue LeBlanc and other collections includes an 18kt “Sputnik” brooch, a ruby ring, amethyst earrings and more. Vintage couture items will feature items from names such as Judith Leiber, Prada, Gucci, Louis Vuitton and Chanel.

Lots 211-214 are dedicated to fine pottery items and include the following:

Paintings by renowned New Orleans and Louisiana artists is another category bidders and collectors have come to expect from Crescent City Auction Gallery, and this sale is no exception.

Live, in-person bidding, as well as exhibition previews, will be held by appointment only, in the Crescent City gallery located at 1330 St. Charles Avenue in New Orleans. Previews will be held daily, starting on Thursday, April 29th (excluding Sunday). A Saturday, May 1st preview will be held from 9 am -1 pm. To schedule an appointment for live gallery bidding on auction day, or for a preview, call 504-529-5057, or, you can send an email to info@crescentcityauctiongallery.com.

Internet bidding will be provided by LiveAuctioneers.com, Invaluable.com and BidSquare.com. Absentee and phone bids will be accepted until 1 pm Central time on Friday, May 7th. A 25 percent buyer’s premium will be applied in-house (three percent discount for cash or check). A printed catalog is available; call 504-529-5057 or email info@crescentcityauctiongallery.com.

Crescent City Auction Gallery is always seeking quality consignments for future auctions. To consign a single item, an estate or a collection, you can call them at (504) 529-5057; or, you can send an e-mail to info@crescentcityauctiongallery.com. All phone calls and e-mails are confidential.

For more regarding Crescent City Auction Gallery and the two-session Important Spring Estates Auction scheduled for May 8th and 9th, please visit www.crescentcityauctiongallery.com.