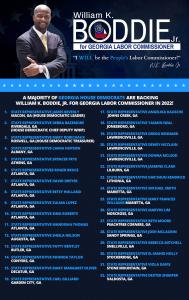 ATLANTA, GEORGIA, UNITED STATES, June 8, 2021 /EINPresswire.com/ — In the early stages of announcing his campaign for Georgia Labor Commissioner, State Representative William K. Boddie, Jr. has a solid list of supporters backing his candidacy. Boddie announced a list of 32 House Democrats that have pledged support and have fully endorsed him as Georgia’s next Labor Commissioner.

“I’m honored to have worked closely with Representative Boddie in the community and in the Georgia General Assembly where he consistently exhibited passion, honesty, determination, fortitude, and ultimately produced results when dealing with challenging issues,” said Minority Caucus Chief Deputy Whip Debra Bazemore. Representative Shea Roberts who also endorsed Boddie said, “ I know he will make Georgia workers a priority, including providing customer service when unexpected emergencies arise. He will modernize operations within the Department of Labor.”

The Department of Labor faced criticism for its handling of unemployment claims from many representatives. “The pandemic made it clear that our Labor Department is in dire need of leadership and reform. I’ve had the opportunity to witness the commitment, leadership, and organizational skills of William Boddie and have no hesitation in offering my support to his candidacy.”

“It’s time for a change in leadership at the Georgia Department of Labor. I am honored to have the endorsement of more than 30 House Democrats who make critical decisions affecting the quality of life for all Georgians and am ready to work with each as they share insight in support of my candidacy,” said Representative Boddie.

Boddie was first elected to the Georgia House of Representatives in November 2016. He has served on the Budget & Fiscal Affairs Oversight, Judiciary Non-Civil, Small Business Development, and Special Committee on Access to the Civil Justice System committees where he has delivered major legislative accomplishments including HB 636 Rest Break For Employees and HB 584 Daily Overtime Pay for Eligible Employees. Boddie continued his work during the pandemic by organizing a coalition of House Democrats to ensure Georgians got the responses required on their unemployment claims.

Boddie is the Founder of the Law Firm of Boddie & Associates, LLC where he practices Personal Injury and Criminal Defense Law. He is also a graduate of the Mercer University-Walter F. George School of Law in Macon, Georgia. He currently resides in East Point, Georgia. For more information please visit www.boddieforga.com.