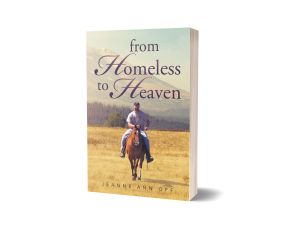 COOKSTOWN, NEW JERSEY, UNITED STATES, March 23, 2021 /EINPresswire.com/ — When life gets a person down it can be very difficult to get back up again, especially when they have lost nearly everything. It will take a strong will and lots of grit to turn one’s life around, and sometimes things don’t often go as planned. In the book of author Jeanne Ann Off, one fortunate man, who decided to help someone way less fortunate who wants to change for the better, found that his good deed would be reciprocated when it was his turn to face challenges. This is the story of From Homeless to Heaven.

Jeanne Ann graduated from Colorado State University and Faith Bible Institute, earning a Bachelor of Science degree as well as a Bible College degree from both, respectively. She took a writing course from the Institute of Children’s Literature, which is one of the cornerstones of her writing career. She and her husband Don both grew up on Western Colorado cattle ranches and are people of faith who hold very important values close to their hearts. They celebrated their 60th wedding anniversary in 2017 and are still going strong.

From Homeless to Heaven tells the story of Cody Cambres who had a standing order with an employment agency. When a homeless man, Alan, answered the call one evening, Cody had found his help. But one day, while checking cows, Alan gets hit by a bullet, and later on, Cody’s best horse was also shot, killed by the same rifle that fired on Alan. When Cody’s ranch is set on fire, and Aimi, a fellow rancher’s house burns down and her husband murdered, Alan helps the both of them get their lives back on track.

A must-have book for people who love suspense and murder mysteries. Get your copy today!

About Writers’ Branding
Writers’ Branding is a full-service self-publishing company that provides aspiring authors exclusive access to publicity and a pool of book evaluators and marketing creatives and bridges them to literary agencies and traditional publishing houses.