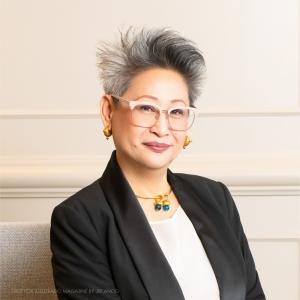 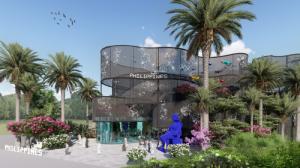 A day exterior photo of the Philippines pavilion, “Bangkóta” at the Expo 2020 Dubai

Independent curator Marian Pastor Roces, commissioned for the fourth time by the Philippine government through the Department of Trade and Industry (DTI), to curate a Philippines Pavilion for a World Expo, this time took up the challenge of speaking to Filipinos about the Philippines. At the very first World Expo staged in the Middle East and Africa —with particular interest in the United Arab Emirates where a Filipino expatriate population of 700,000 live — the Philippines Pavilion anticipates a raised level of interest among Filipinos, together with the expected global audience.

Roces says that two starting points were “Rich. Worthy.” The first given: the pavilion is located in the Sustainability District of the Dubai Expo grounds. And the second idea set in place at the start was the pavilion name, Bangkóta, coral reef, given by Architect Royal Pineda to the organically-shaped design with which he won the commission. Moreover, Architect Pineda thought to focus on cultural sustainability —instead of the sustainability of the usual definitions — bringing the location and the architecture together.

The Philippine Trade and Industry department, who leads the country’s participation, looks at the Expo 2020 Dubai as an opportunity for the Philippines to present, on the world stage, a surprising, complex, and stirring self-portrait of a national community.

To Roces —who is a cultural analyst and institutional critic— the curator’s task began with “updating the knowledge circulating about the emergence of the Filipino, based on the current global consensus in science”. Primary is the information about the movement of Austronesian-speaking peoples from the north of the Philippines, southwards, starting 4000 years ago. And the subsequent spread of oceanic travelers outwards from the Philippines to Indonesia, the entire Pacific Ocean, and Madagascar.

However, instead of documentary techniques or tableaux approaches, the veteran curator selected and worked with Filipino artists to poetically evoke what science is saying today.

Roces says of her choices: “The artists were selected for their considerable skills at maintaining their own Modern and Contemporary Art idioms while thinking through complicated material, such as persistent mythological imagination of the Filipino, mixed with new data, through social change.” Working individually and collectively with them, Roces is creating a pavilion environment in which visitors can open to a long-duration story.

It is a story of a people, speaking more than 170 deeply-related languages, share a love for ritual; a passion for connectivity; a culture of maritime travel that launched trans-oceanic voyages for the human race; and persistently think symbolically even while absorbing other kinds of thinking from Europe and Asia.

Like coral reef, Filipinos are at home in currents that take them everywhere, even in the face of grave threat during travel and relocation. Roces points out about the peoples of the Philippines: “…who have for thousands of years built communities in near and distant lands” and are now “…rising to the very top among the most digitally networked people on earth.”

Curated to enchant, the pavilion spaces are defined by a sequence of large, intriguing sculptures that are made even more fascinating by the surrounding avant-garde music of National Artist Ramon P. Santos. The overall visitor experience takes in a cultural imagination that has endured through the thousands of years of Austronesian language dispersal through the Philippine archipelago.

Together in the pavilion’s spaces, the architect, artists, and curator deliver a cosmopolitan Philippines that is made confident by both scientific accuracy and a robust imagination. It is a confidence Roces believes will be further elevated, especially among Filipino workers in the Middle East, by the pavilion’s re-set of the Philippine narrative.

“Expo Dubai 2020 is an entirely different adventure”, she recaps, adding that “…I had to find an elusive balance between asking the artists to preserve their own ways of artmaking, on one hand, and on the other, asking them to drive a collective narrative.”

The DTI commissioned Ms. Roces as Curator for this important event citing her five decades of experience establishing many of the Philippines’ major museums, including the Museum of Contemporary Art and Design (MCAD), among others.