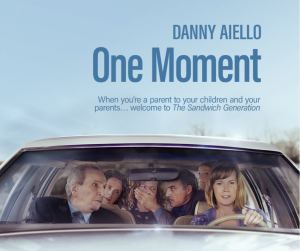 One Moment is a humorous and heart-warming film about middle-age siblings struggling to manage their lives, while caring for their aging father.

Academy Award Nominee Danny Aiello plays Joe McGuinness, father to Caroline (Adria Tennor) who puts her life on hold to assist her aging father. Not an easy adjustment for anyone. 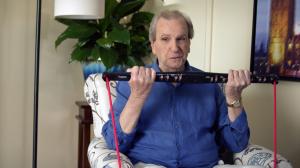 Danny Aiello in his final film performance, One Moment. Aiello, who passed away shortly after completing the film, was awarded “Best Actor” at the Beaufort International Film Festival.

The film was awarded Best Comedy and Best Actor (Danny Aiello) during BIFF and was a top trending hit movie during Cinequest Fest. Of more than 100 films at Cinequest, One Moment was highlighted in San Jose Mercury News as “1 of 12 films you should see.” IMDB’s founder and CEO listed his favorite films of Cinequest 2021 – One Moment was one of them “featuring a great final performance from Danny Aiello.”

This comedy resonates on so many levels. After his wife’s recent death from Alzheimer’s, Joe McGuinness moved in with his daughter Caroline and her teenage daughter. It is not an easy adjustment –for anyone. Joe is demanding and difficult and stubbornly believes he is still capable of running his own life –despite evidence to the contrary. Caroline and her sister Fran put everything on hold, rearranging their daily schedules, careers, and personal lives in order to assist their aging father. Two out-of-town siblings do little to help –but, when they do, offer impractical and uninformed solutions that only add to the upheaval and chaos. Although the family is at odds as to how best care for their father in his final years, they are united in wanting to ensure his well-being and help him find peace of mind–without them losing their own. Welcome to the Sandwich Generation.

After writing screenplays for many years, Deirdre O’Connor decided it was her MOMENT to write, produce, and direct a feature film. Deirdre is an Associate Professor of Communications and Film at SUNY Nassau Community College in New York since 2004. Production was completed 10/31/20, with a Run-Time of 1:54.

An Annapolis Film Festival $10 individual pass buys virtual access to view One Moment exclusively April 16th, 17th and 18th, while other Festival packages are available for the week. The film is screening in Maryland, Washington DC, and Virginia cities: Alexandria, Arlington, Crystal City, Falls Church, Fairfax, and McClean. Festival goers may purchase a pass at: https://bit.ly/3tgoN5l.

Cinequest 2021: Here are 12 films to see at San Jose’s virtual fest. With more than 100 streaming films and events, here’s what you should see: https://bayareane.ws/3sYyHIL