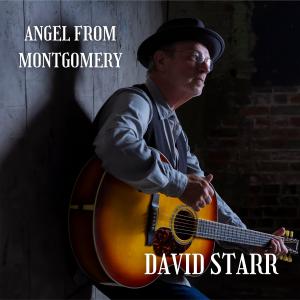 NASHVILLE, TN, USA, April 8, 2021 /EINPresswire.com/ — Americana singer/songwriter David Starr honors the late John Prine with a cover of “Angel From Montgomery” as part of his ongoing Touchstones project. The classic song gets a fresh take with a rootsy approach of mandolin, fiddle, pedal steel, and Starr’s signature emotive vocals. To commemorate the passing of the prolific songwriter and artist on April 7, 2020, Starr’s version is available across all digital platforms today.

“John’s writing has inspired me and countless others over the years to be better at our craft. So, when I decided to record my Touchstones album of cover songs in 2020, ‘Angel From Montgomery’ was always on the short list of songs for the record,” Starr notes. “I’ve played it for years all over the US and in the UK. The response is universally warm; as if it belongs to us all. That seems to be the magic and legacy of John’s songs. And I am profoundly grateful for the gift of his music.”

“Angel From Montgomery” marks the sixth track of Starr’s evolving album project, Touchstones. Born in quarantine, Starr took time to reflect on and experience anew the music that shaped his own, and will be releasing a single a month leading up to a full album this fall.

Previous singles include “I’ve Got To Use My Imagination” (Gladys Knight), “Someone Like You” (Van Morrison), “These Days” (Jackson Browne), “Gotta Serve Somebody” (Bob Dylan), and “Every Kinda People” (Robert Palmer/Andy Fraser). All of the tracks for Touchstones were produced by David Starr and Mark Prentice, with co-production by David Kalmusky.

ABOUT DAVID STARR:
David Starr possesses “a compelling voice, something truly special, both accessible and passionate” (Elmore), that has been honed releasing ten albums, touring internationally, and opening shows for esteemed artists such as John Oates (Hall & Oates), Karla Bonoff, The Steel Wheels, Survivor, and more. Starr’s prestige extends beyond the stage as well, having launched Starr’s Guitars in Little Rock in 1998, then relocating to Cedaredge in 2001. Today, the store is such an institution that Cedaredge proclaimed the musician’s birthday as David Starr Day in 2016. Starr was also instrumental in the 2018 opening of the Grand Mesa Arts Center, an intimate event space brought to fruition through strong community support in Cedaredge, CO. He helped design the space in order to attract musicians and visual artists to Southwestern Colorado. For more information, please visit davidstarrmusic.com.