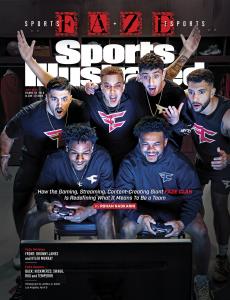 “HOW THE GAMING, STREAMING, CONTENT-CREATING GIANT FAZE CLAN IS REDEFINING WHAT IT MEANS TO BE A TEAM”

In conjunction with the cover story, Sports Illustrated released an exclusive behind-the-scenes video from the cover shoot, highlighting the road FaZe has paved within the gaming space over the past 11 years. Additionally, fans can tune in now to see FaZe Nickmercs unveil the cover live on his Twitch channel and watch first-time reveal moments from each star on the cover on FaZe Clan’s Twitter later today.

“THEY’VE USED THEIR REPUTATION TO BRING MORE PEOPLE IN THE TENT THAN EVER. ATHLETES USED TO BE THE ANTITHESIS OF GAMERS– NOW FAZE IS HELPING THEM BE SEEN AS ONE IN THE SAME.”

In celebration of Sports Illustrated converging with gaming culture for this iconic cover story, fans can purchase a limited collection of t-shirts, hats, crewneck sweatshirts and a special limited-edition version of the magazine (some of which are signed by FaZe talent) only on the NTWRK app on June 12th at 11am PT.

About FaZe Clan
Since its inception in 2010, FaZe Clan has established itself as the world’s most prominent and influential gaming organization known for its disruptive original content and hyper-engaged global fanbase of over 350 million combined across all social platforms. FaZe Clan holds an unrivaled position at the epicenter of gaming, sports, culture and entertainment, driving how the next generation consumes content, plays and shops. Their roster of 85 influential personalities consists of world-class gamers, engaging content creators and a mix of talent beyond the world of gaming, including NBA star Ben Simmons, Lebron “Bronny” James Jr and Lil Yachty. The organization’s unmatched esports division includes ten competitive teams in Fortnite, FIFA, FIFA Mobile, PUBG, PUBG Mobile, Rainbow Six, Call of Duty League (Atlanta FaZe), VALORANT, Rocket League and CS:GO with dozens of world championship trophies among them. In addition, FaZe Clan has become a sought-after fashion and lifestyle brand through an inspired apparel line and limited-edition collaborations with partners including Champion, NFL, Manchester City FC, Lyrical Lemonade, Kappa, CLOT, LA Kings, and more. Follow us @FaZeClan, @FaZeApparel and @FaZeUpdate.

About Sports Illustrated
Sports Illustrated (SI) is an unparalleled and influential leader recognized for its role in shaping modern culture and uniting athletes, teams and fans worldwide. We bring powerful storytelling to life through world-class live events, immersive experiences, and lifestyle products. SI’s award-winning media enterprise captures moments and turns them into history through rich and thoughtful journalism, iconic and beloved photography, and across digital platforms ranging from Emmy-winning video to an ever-expanding social community.