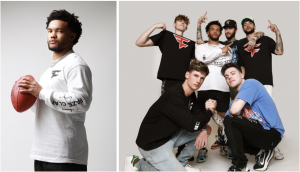 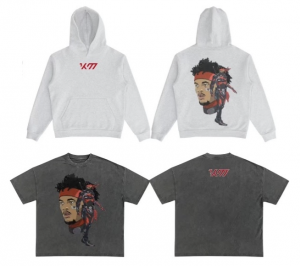 FaZe Clan, the world’s most prominent and influential gaming organization, welcomes NFL superstar and Arizona Cardinals quarterback Kyler Murray as its newest official member. In typical FaZe fashion, the announcement was made today in the form of a high-energy, plot-twist video that sees FaZe Banks interrupting the NFL Draft and taking over Commissioner Roger Goodell’s first pick announcement as he welcomes one of the biggest names in football to the most sought-after team in gaming. Watch the announcement video featuring Travis Scott’s “Goosebumps (Remix)” HERE.

Kyler Murray, officially known today as FaZe K1, was the No. 1 overall pick in the 2019 NFL Draft. Though he may be most known for his football career, Murray has been playing video games since he was five-years old and has been passionate about gaming long before football and FaZe Clan were in the picture. Murray, who has always enjoyed the camaraderie and competitive nature within the space, now leans on gaming as an escape and a way to connect with his fans on a more personal level during his Twitch livestreams. He spends several hours a day playing games like Madden and Call of Duty with his teammates, which has become the antidote to his unstoppable competitive energy when he’s not on the field. Additionally, Kyler is in the process of investing in FaZe Clan and once that is finalized, the terms of the investment will not be disclosed.

“I’ve played video games my whole life,” says Murray. “To be drafted by FaZe and welcomed into the family is a blessing and an honor, and honestly one of the most exciting moments of my life and career so far. I am looking forward to this next chapter and representing FaZe at the highest level.”

In celebration of the announcement, FaZe Clan is releasing an official FaZe K1 merch capsule within the organization’s upcoming in-line spring drop. The FaZe K1 capsule, which features a limited-edition t-shirt and hoodie, ranges from $40-$90 and will be available Thursday, April 29th at 12pm PT on fazeclan.com.

The launch coincides with the 2021 NFL Draft and this year’s Draft-A-Thon, which kicks off this Thursday. Several FaZe Clan members including FaZe Swagg, FaZe Nickmercs and FaZe Nate Hill are confirmed to participate in this year’s Draft-A-Thon, the NFL’s fundraiser that will look to drive awareness and action to close critical gaps at the intersection of pandemic recovery and our hardest hit communities.

“We’re so stoked to officially welcome Kyler to the FaZe family,” says FaZe Banks. “Aside from being one of the best QBs out there, he is embedded in the gaming community racking up hours upon hours playing and streaming. The friendship with Kyler, myself and all the FaZe members is natural and organic. He’s a perfect fit for FaZe as we continue to lead the cultural collision of traditional sports and gaming.”

This isn’t the first time FaZe Clan has disrupted the traditional sports space. Last year, the organization launched collaborations with both the NHL and NFL and participated in the first-ever NFL Draft-A-Thon, a virtual fundraiser for pandemic relief, in addition to a momentous partnership with Manchester City F.C. In August 2020, FaZe announced two new official members including NBA superstar and Philadelphia 76ers forward Ben “FaZe Simmo” Simmons who is also an investor and LeBron “FaZe Bronny” James Jr.

About FaZe Clan:
Since its inception in 2010, FaZe Clan has established itself as the world’s most prominent and influential gaming organization known for its disruptive original content and hyper-engaged global fanbase of over 350 million combined across all social platforms. FaZe Clan holds an unrivaled position at the epicenter of gaming, sports, culture and entertainment, driving how the next generation consumes content, plays and shops. Their roster of 85 influential personalities consists of world-class gamers, engaging content creators and a mix of talent beyond the world of gaming, including NBA star Ben Simmons, Lebron “Bronny” James Jr and Lil Yachty. The organization’s unmatched esports division includes nine competitive teams in Fortnite, FIFA, PUBG, PUBG Mobile, Rainbow Six, Call of Duty League (Atlanta FaZe), VALORANT, Rocket League and CS:GO with dozens of world championship trophies among them. In addition, FaZe Clan has become a sought-after fashion and lifestyle brand through an inspired apparel line and limited-edition collaborations with partners including Champion, NFL, Manchester City FC, Lyrical Lemonade, Kappa, CLOT, LA Kings, and more. Follow us @FaZeClan, @FaZeApparel and @FaZeUpdate.