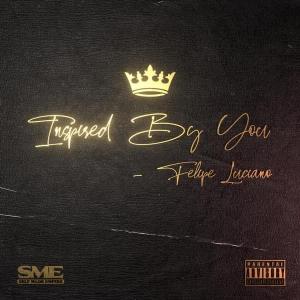 Inspired by You Available Now on All Major Platforms

“Inspired by You” is a smooth and emotionally intellectual album. Felipe reflects on many regrets and pains of the past. Felipe details what it’s like to be a street guy and the damage caused when living a certain lifestyle.

Felipe also speaks on the regret he has of choosing his friends who are responsible for his incarceration, over his love. On the other hand, his long-term love has always been an inspiration for him hence the title “Inspired by You”.

When asked about the inspiration for the EP Felipe’s answer was easy, it was his long-time flame. “I wanted to let her know that she has been a huge inspiration in my life and for a lot of the music that my fans know and love. I wanted to publicly thank her for that. So this is a compilation of songs that she has inspired or was around to understand the feeling behind these songs.”

The release of “Inspired by You” follows Felipe’s critically acclaimed mixtape titled Legends Never Die. The mixtape featured MMG veteran Gunplay and was in Hype Magazine, on CBS broadcast television, ETV and other outlets. Now that Felipe’s first project of the year has been released he is already working on more hits for this year.

“Inspired by You” is available now on Spotify, Apple Music, and all other major platforms. Follow Felipe Luciano on Instagram for future releases.

Felipe Luciano is a hip-hop artist from Shelby, NC. Felipe’s first experience with music was at six years old when his grandmother taught him how to play “Lean On Me” on the piano. From that point on his love for music grew. He eventually taught himself how to play the piano and soon after started to write his own music. At age eleven, Felipe moved to Los Angeles where he and his family were homeless were soon exposed to a new world of gang violence. With no solid sense of direction or hope for his future, Clifton became a “Bloods” gang member and started wrapping as a creative outlet. Today, Felipe Luciano makes music that he hopes will touch those that are growing up in a similar situation – navigating through pain and obstacles of gang violence while searching for a way out.

Felip and his wife have also co-founded the non-profit organization, Helping Our People Excel (H.O.P.E.). The organization has a special focus on inner-city youth who are susceptible to gang violence, the organization offers resources and programs that teach financial literacy, ownership, business development, and more.