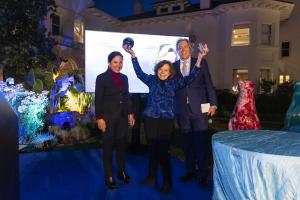 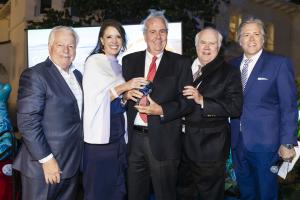 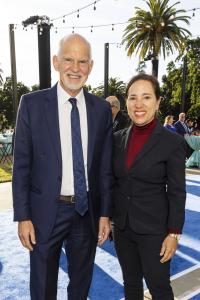 “The time has come for nations to unite for green democracy and address Climate crises,” said former Prime Minister of Greece, H.E. George Papandreou in his opening remarks to over 160 CEOs and Executives gathered in the Silicon Valley.

“We are pleased by the commitment of this White House to tackle Climate Change with tangible steps and decisive shifts in policy. The Bay Ecotarium will offer a unique platform to inspire generational change. 75 years ago, San Francisco gave birth to United Nations that changed the world, and it is time to lend life to United Nature”, says George Jacob FRCGS, President & CEO.

Legendary Ocean Explorer Dr. Sylvia Earle received a standing ovation to her lifetime contributions to sustainable oceans. “I hope one thing that you can take away from this evening is recognition that we have an opportunity, right now-to turn from what we have experienced in this this time of decline in the Anthropocene. We have the opportunity to turn this from decline, to recovery, and to make peace with nature, with the ocean, with the planet, and maybe even among ourselves,” remarked Sylvia in her moving acceptance speech accepting the award from Lt. Governor Kounalakis. “Thank you George Jacob, for creating this vision of building on this idea-what was already a good idea-making a big difference in this part of the world and for educating people that have stumbled on this great place at pier 39 and come away enlightened….”

“Truly, we have an American icon here – a pioneer in every sense of the world. Sylvia, thank you for being here with us-for joining us, supporting this incredibly important project, and for getting up every day and being our most valiant warrior in our fight against climate change and the fight to protect our oceans!” said Eleni Kounalakis, Lt. Governor of California while conferring the 2021 Blue Marble Award to Dr. Earle.

The event also honored Michael Gallagher, the founding Director of Under Water World 25 years ago, with a moving tribute by his brother Patrick Gallagher presided over by Caroline Beteta CEO of Visit California and Roger Dow, President & CEO of US Travel.