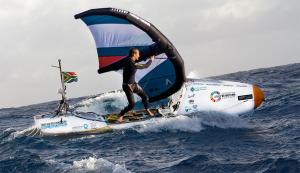 We are in the most important race of our lifetime, a race against time. If we don’t act now, the disastrous effect of climate change could be irreversible by 2030”
— Chris Bertish, G100 Visionary, Waterman and Conservationist

The first initiative of the G100 Blue Ocean campaign will support the Trans-Pacific Wing Project – helmed by G100 Visionary, Speaker, Author, Waterman and Conservationist, Chris Bertish. Chris is the founder of Chris Bertish I’mPossible and the Chris Bertish Foundation. He is a Mavericks Big Wave Champion, World Record Holder in multiple Stand-Up Paddle Boarding achievements, and was the first person to cross the Atlantic Ocean on a Stand-Up Paddle Board in 2017.

“We are in the most important race of our lifetime, a race against time. If we don’t act now, the disastrous effect of climate change could be irreversible by 2030,” states Chris Bertish.

The Trans-Pacific Wing Project casts off today (June 8) with Bertish beginning his journey to traverse 2,750 miles of the Pacific Ocean, starting on the West Coast of California, Half Moon Bay, across the Pacific to Oahu, Hawaii. He will be the first person to wing-foil across any ocean in the world, solo and unsupported.

The journey will take an estimated 50-60 days and is expected to finish in Oahu, Hawaii. Bertish expects to wing and paddle a minimum of 8-12 hours per day, covering between 40- 60miles/over 60- 90km per day. He will be tracked by a GPS daily during the entire crossing, which the public will be able to follow daily across all the media platforms via satellite web tracking and weekly “Captain’s Vlogs” on social media.

The G100 Blue Ocean campaign will provide additional communications and fundraising support for the Trans-Pacific Wing Project through Genius 100 Foundation’s active, engaged, global community, of which Bertish is an esteemed Genius 100 Visionary. Funds will support awareness of and initiatives for global ocean conservation, education, and sustainability.

“We are extremely proud to support the work Chris is doing which highlights a cause so critically important to all of us, and we are so excited to be part of his truly incredible journey,” states Hilarie Viener, CEO, Genius 100 Foundation. “Extraordinary doesn’t even being to cover it – what he (Bertish) is doing truly defines making the impossible possible.”

On his last ocean journey, he single-handedly redefined the concept of Extreme Adventure by becoming the first person ever to Stand Up Paddle across any ocean. Solo, unsupported and unassisted – he traveled for 93 days across the Atlantic Ocean to Morocco, Africa to Antigua (Caribbean).

To learn more or watch Bertish live, go to https://chrisbertish.com/project/transpac-wing/

About the Genius 100 Foundation
Genius 100, referred to as G100, was born out of the centennial celebration of Einstein’s Theory of Relativity (2016). To honor this landmark occasion, 100 of the world’s greatest minds were researched, selected, and nominated to contribute their vision of the future to the publishing of the first 3D book” Genius:
100 Visions of the Future.”

Founded in Toronto in 2017, with a global footprint, Genius 100 Foundation US (G100) is a 501c3 non-profit with an active and engaged community of exceptionally imaginative and impactful human beings.

The Genius 100 Visionaries (G100V) are comprised of an extraordinary group of 100 globally recognized, accomplished, compassionate minds. The Genius 100 Foundation brings together Visionaries, philanthropic impact investors and its extended global community, collectively and in collaboration, to re-imagine the future – implement creative initiatives to improve our world – raise the bar on what is achievable and make the impossible – possible.

Genius 100 Foundation Mission
We leverage the knowledge and resources of the G100 community to support impactful humanitarian and environmental initiatives through collaboration and funding structure.

Genius 100 Foundation is a registered Charity in Canada and 501c3 US.