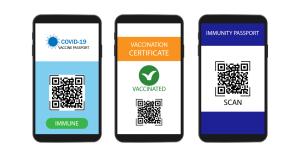 As COVID cases dropped in recent weeks, hope across America for a restoration of freedom began to re-emerge.

This is the single greatest threat to your freedom to travel, your health, and, indeed, even to live a normal life.”
— Mat Staver, president of Liberty Counsel

“As COVID cases dropped in recent weeks, hope across America for a restoration of freedom began to re-emerge,” said Harris. “But the Biden-Harris Administration evidently has another agenda.”

Recently, the state of New York announced it was rolling out a “vaccine passport” to prevent access to goods and services by everyday Americans who have failed to receive the experimental vaccines.

The Biden-Harris Administration denied that it would ever require vaccine passports, but newly revealed documents show that New York’s program is actually part of a nationwide initiative fueled by the federal government.

“Our friends at Liberty Counsel have been examining the issue of vaccine passports and are sounding the alarm against government overreach and violations of individual liberties,” Harris said.

“This is the single greatest threat to your freedom to travel, your health, and, indeed, even to live a normal life,” said Mat Staver, president of Liberty Counsel. “This is the high-tech equivalent of the Nazi demand of ‘Papers, please’ — and it is coming unless we stop it NOW.”

Though the White House has publicly denied supporting vaccine credentials, Liberty Counsel has obtained a copy of a presentation that lays out the federal strategy.

Included in the government document are the following statements:

• “Vaccine Credentials—A Key Element of Recovery Efforts: Proof of vaccination for certain activities is not new. What is new is that such proof may be a critical driver for restoring baseline population health and promoting safe return to social, commercial and leisure activities.”

• Its goal is the “coordination and alignment of vaccine credential activities across [Health and Human Services] agencies.”

• “. . . for an individual’s return to day-to-day activities, Federal government will inevitably be involved with vaccine credential solutions . . .”

• “Federal entities, like their commercial counterparts, will likely require vaccine verification for a variety of purposes.”

• This federal group “will build a shared database of initiatives and contacts for future meetings as well as a resource for Federal agencies to work with each other.”

• “The VA [Veterans Affairs] Office of Information Technology is engaged with the Vaccine Credential Initiative. We are implementing a VA-issued vaccine credential.”

• “Will there be federal uses?” It lists places that ask for vaccine passports such as “International and domestic travel,” “Access to Federal facilities,” “Access to VA/DOD and military facilities” and “Federal health care providers for continuity of care.”

• It is a “forum for raising awareness of initiatives across Federal agencies . . . and communicating progress to the White House.”

“Educating people of faith to engage in public affairs is important for maintaining biblical values in our society,” said Harris.

“We find often that churchgoers and pastors don’t know where to start,” said Harris. “Our goal is to educate audiences and connect with resources and groups across the nation to help them impact their own spheres of influence.”

To make your voice heard, visit Liberty Counsel’s website to sign a petition and to tell your lawmakers to STOP mandatory vaccinations and vaccine passports.

About Andrew Wommack:
Andrew Wommack is president and founder of the Truth & Liberty Coalition, Andrew Wommack Ministries, and Charis Bible College. He and other Christian leaders established the Truth & Liberty Coalition to educate, unify, and mobilize believers in Jesus Christ to affect the reformation of nations through the seven mountains of cultural influence. Since 1968, he has taught God’s Word with clarity and simplicity, emphasizing the unconditional love and grace of God. His vision is to spread the Gospel as far and deep as possible through his daily Gospel Truth television and radio programs, broadcast nationally and internationally, as well as through GospelTruth.TV, his internet television network.