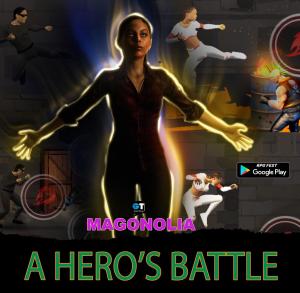 The new Magonolia game allows users to play in different stages based on the Magonolia TV series about a sixteen-year-old girl with superhuman powers.

TRINIDAD, April 29, 2021 /EINPresswire.com/ — GT Network Caribbean has just launched the new Magonolia game, where users can play Magonolia the teen superhero as she battles gangsters of the night underworld with vigilante Night Rogue, another character from GT’s Vile Ventures superhero universe. Players will dash, jump, and run, avoiding aliens and collecting coins through six levels of adventure. Complete with stunning, colorful graphics and easy-to-use functions, this game offers a fun and unique arcade experience through your phone.

The Magonolia game is based on GT’s Magonolia TV series, which tells the story of a sixteen-year-old girl named Rachel Quintino, who discovers a secret new side of herself. Dealing with family issues and the struggles of daily life, she discovers that she has the power of telekinesis and other superhuman abilities. She is described as the “Caribbean Superhero,” and the show follows her adventures through new worlds, battling supernatural forces, and overcoming insurmountable odds. The Magonolia game adds an entirely new dimension to the universe, allowing fans to become part of Magonolia’s world and experience her adventures.

“As a child of the ‘80s and ‘90s, this is like a modernized version of some of my favorite games like Streets of Rage and Final Fight,” said user Jameel Donawa. “Something I’d actually play on my downtime. Great work Magonolia team!”

The Magonolia game offers a unique combination of a modern, compelling story with the nostalgia of an old arcade game and a Caribbean twist. The game offers two different characters and a variety of scenarios for users to play in and is an exciting new up-and-coming RPG.

Magonolia – A Hero’s Battle can be downloaded for free on the Google Play store and more information on the game and TV show is available at https://www.gtcaribbeannetwork.tv/magonolia.