How Devastation Led an Expert Luthier to His Dream

How Devastation Led an Expert Luthier to His Dream 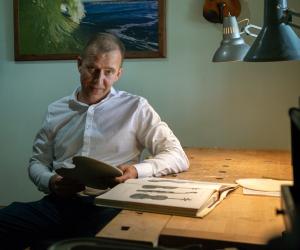 Thanks to that moment, I strive to make the world a better place, creating instruments that make music which enriches the lives both of those that play and those that hear those instruments.”
— Dereck Coons

No one plans to find their career by accident, particularly not those who already have a plan in place. But, stumbling across something that you love enough to change course is a true testament to the power of passion. However, it doesn’t always feel that momentous when it first happens. Skilled luthier Dereck Coons knows that for a fact, after his plans to become a doctor were derailed at university. Told he couldn’t continue with an elective music class because he needed a higher quality instrument, the devastation he faced was crushing. So, he went on to learn how to craft his own instruments – and was unexpectedly introduced to a world that would sustain him for the rest of his life.

Really, all Dereck had wanted to do was build a guitar that was good enough to get him back on-track. Little did he realise that he was falling headfirst into what would become a lifelong love: violin-making. Now, every single facet of his life is enriched, because his day-to-day is dedicated to living out a dream he initially hadn’t realised he had. He owes much of his current vitality to the passion he has for his work, and these days he can happily say that he is the successful owner of a bespoke violin-making business, as well as a devoted husband and a dabbler in diving, surfing, and fishing.

What Dereck’s university experience taught him is that no hardship is final, no matter how earth-shattering it might seem at the time. He realises now that there was a bigger plan at play and that, ultimately, he was being guided to something better. As he himself explains: “Thanks to that moment, I strive to make the world a better place, creating instruments that make music which enriches the lives both of those that play and those that hear those instruments.” In other words, he has found his calling. And, as a teachable moment for all of us, he can trace his sense of immense purpose to that one devastating event all those years ago.