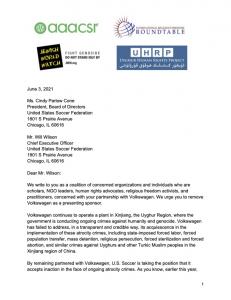 A coalition of 86 human rights and religious freedom leaders and organizations are imploring the US Soccer Federation to end its partnership with Volkswagen.

A coalition of 86 human rights and religious freedom leaders and organizations are imploring the US Soccer Federation to end its partnership with Volkswagen, so they do not remain complicit in the company’s “inaction in the face of ongoing atrocity crimes.” Click HERE to read the full letter and list of signatories.

Volkswagen is currently operating a plant in the Uyghur Region of Xinjiang and has yet to seriously address or denounce the Chinese Communist Party’s crimes against the Uyghur people.

During the Uyghur Week of Action in April, AAACSR, IRF Roundtable, JWW, and UHRP called on Volkswagen to close its operations in China.

Advocacy for the Uyghur people, and calling on Volkswagen to end complicity, has continued through the release of this letter to US Soccer Federation President Cindy Parlow Cone and Chief Executive Officer Will Wilson.

Given Volkswagen’s history of deep complicity in the crimes of the Holocaust, particular concern has been expressed given that its continued refusal to answer urgent questions about its partnership with the Xinjiang government is unacceptable.

By remaining partnered with Volkswagen, US Soccer is taking the position that it accepts inaction in the face of ongoing atrocity crimes.

Earlier this year, the US Government and the Canadian, UK, Dutch and Lithuanian parliaments determined that these crimes constitute crimes against humanity and genocide. The EU, New Zealand, and Italy have also passed motions condemning the abuses.

As US Soccer views the sport of soccer as a “powerful vehicle for social change,” as stated in the Federation’s mission, the partnership between US Soccer and Volkswagen hinders social change and is a disservice to underserved communities.

The International Religious Freedom Roundtable is a convenor of NGOs and individuals from any faith that works for freedom of religion or belief. https://www.irfroundtable.org

Jewish World Watch is an expression of Judaism in action, bringing help and healing to survivors of mass atrocities around the globe and seeking to inspire people of all faiths and cultures to join the ongoing fight against genocide. https://www.jww.org

The Uyghur Human Rights Project promotes the rights of the Uyghurs and other Turkic Muslim peoples in East Turkistan, referred to by the Chinese Communist Party as the Xinjiang Uyghur Autonomous Region, through research-based advocacy. https://uhrp.org