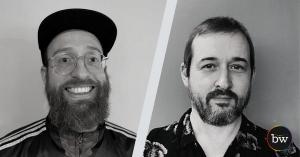 Mark is an award-winning video editor having worked on shows such as Black Mirror, Peaky Blinders, Sherlock, Taboo, and The Crown. His debut feature film, ‘4.3.2.1’ was released by Universal and sold to 19 territories by Icon. The second, The Dark Channel, is a Sci-Fi Dystopian Noir currently in post-production.

Mark is passionate about independent journalism and also works as a political writer for BN1 Magazine in Brighton.

“I’m delighted to be joining Bywire at this exciting time. I’m looking forward to producing a platform which hosts a variety of ground breaking content, free from disinformation and the control of media moguls,” he commented.

“My goal is to never tell people what to think, but to give them the facts to think clearly. By providing the audience with information in an engaging way, I believe we can create a shared truth that counters the didactic fiction of disinformation and tilted realities of customised news.”

Thomas Barlow is a cofounder of Real Media, the Independent Media Association (formerly The Media Fund) and Bywire.
He has worked in independent media for nearly a decade and has contributed to Open Democracy, Novara Media, Byline Times, the Real News Network, RealFare, Manchester Mule and more.

He has appeared on numerous podcasts and video shows including Novara’s ElectionSesh#1, TRNN, The Jist, and was the host of News Club UK.
He also has experience in event management, and has worked with the Media Democracy Festival, the BBC and Beyond Tour, Byline Festival, Festival of Debate and the Independent Media Conference.

“Without useful, truthful information about the world, we cannot hope to change it. And it needs to change. My belief is that only media which is free from the control of global corporations, billionaire barons and state governments can get us that information. I am excited to create methods by which this kind of real journalism can become financially sustainable, accountable to its readers and extremely popular.

Mark and Thomas join at a time when Bywire is set on an exciting period of expansion as it sets out to set the standard for accurate, balanced, and accountable journalism.

“We are very pleased to welcome Mark and Thomas to our team. Both are powerful voices for independent journalism. We look forward to working with them, as together we challenge the bias, misinformation, and systemic racism that exists in our media landscape today.”