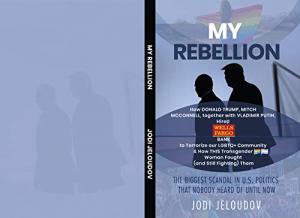 My Rebellion reveals the truth of ruthless attacks on the transgender community by major institutions and politicians across the United States.

UNITED STATES, May 6, 2021 /EINPresswire.com/ — In the United States today, attacks on transgender rights are on the increase and must be stopped. My Rebellion tells the harrowing story of activist Jodi Jeloudov, who was attacked by prominent institutions and politicians including Wells Fargo Bank, Mitch McConnell, Donald Trump, and Vladimir Putin. These attacks are part of a larger effort to undermine the rights of minority groups, one which Jodi has been fighting against for years. The book sheds light on the dire situation of marginalized communities today, but also offers hope, showing a generation of leaders emerging in the LGBTQ+ community.

My Rebellion tells the story of this fight for transgender rights as a part of Jodi Jeloudov’s lifelong journey of activism and advocacy. Jeloudov is a proud Jewish transgender woman and disabled US military veteran who has been fighting for the rights of marginalized groups for years. The book aims to reveal the story that many don’t see, the discrimination that doesn’t make the news, and it is full of real-life evidence and documentation showing how these attacks, and the fight against them, were carried out.

“I could not put this book down until I had read it through!” said reader Macy Adams, “It frightened and upset me for all the right reasons and I’m straight! I finally realized what all of my LGBTQ+ friends had been telling me was actually true and way worse. Would recommend it to anyone who thinks that the community exaggerates when they say they are treated unfairly in the workplace.”

My Rebellion takes on not only issues of transphobia, but reveals larger systems of race, gender, and disability discrimination and the intersections between them. The book is an honest reflection of harsh reality and a call for urgent and immediate change.

My Rebellion is available on Amazon, and more information can be found on the My Rebellion website.