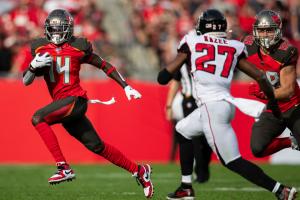 Some of the topics covered in Cochran’s interview with Franklin include:

• his experience being part of a Super Bowl championship (even though he didn’t get a chance to play in the big game) and how he is looking forward to
another opportunity next season,
• what it’s like playing with seven-time Super Bowl champion and future Hall of Famer Tom Brady,
• his Super Bowl champion perks including buying his first home at 26,
• how it felt to be included in the NCAA football and Madden video games,
• what he would create if he could develop a video game,
• who would he rather be in a foxhole with — Rob Gronkowski (Gronk) or Brady,
• what’s behind his intense and yet intricate footwork and balance drills showcased on YouTube,
• his giving back to the community with his upcoming football camp, “Champ Camp,” for youngsters held on April 17 in Sunrise, Florida
• how he developed his gaming skills in “Call of Duty” during the downtime of injury rehab,
• and how fast is his 40-yard dash.

You can watch the entire show, which aired on April 13, here:
(https://youtu.be/YZD1ZdRLu-M).

Known for his impressive speed, the 6-foot-1, 186-pound Franklin was signed to the Tampa Bay Buccaneers practice squad in November 2019 and was promoted to the active roster a month later, where he was listed as wide receiver.

After suffering a leg injury during training camp, Franklin was placed on injured reserve in August 2020. Although he was on the Buccaneers team that won Super Bowl XV in February 2021, he, unfortunately, didn’t get an opportunity to play in the championship game.

Before joining the Buccaneers, Franklin previously played in the NFL for the Chicago Bears where he was drafted as a free agent in 2018.

As one of the highlights of his college career, Franklin was featured in the Netflix show “Last Chance U” about college football teams pushing to make a big name for themselves. Franklin showed off his football skills on the show as a player for East Mississippi Community College.

During his college football career, Franklin played quarterback for Florida State from 2013-2014 where he also was a member of the ACC champion 4×100 relay team. He then transferred to East Mississippi Community College, which is where the Netflix series was filmed in 2015. During that year, Franklin completed 64 passes (58.2%) for a total of 733 yards. He also ran 451 yards, giving him an average of 10.5 yards per carry and nine rushing touchdowns.

Franklin then enrolled at Auburn for his junior year of college, where he appeared in 12 games with an explosive average of 9.3 yards per carry. It was at Auburn where he realized the true potential of his running game and he made the switch from quarterback to wide receiver for the 2017 season and transferred to Florida Atlantic University. There he achieved an average of 14.3 yards per carry and 13.6 yards per catch. His speed (4.40 seconds in the 40-yard dash) was noticed by the Chicago Bears who picked him out of their rookie training camp and added him to their practice squad in November 2018.

“As a first of its kind, The Gamer Hour celebrates the convergence of traditional sports, music, comedy, and acting with esports and gaming. If you enjoy hearing about celebrities that have grown up with gaming, and who lead interesting busy lives, The Gamer Hour is a must-see and share show,” said Mark Thimmig, chairman, CEO of Esportz Network.

The Gamer Hour, which is filmed at the iconic New York City Times Square Reuters studio and produced by Reuters Broadcast Solutions and Esportz Network, is available globally on Fite.TV, (https://www.fite.tv/vl/p/esportz-network/), and more than 50 media distribution platforms.

The Gamer Hour, airing on Tuesdays at 6 p.m. PST, features interviews with celebrities from traditional sports, musicians, comedians, and movie stars that enjoy gaming. This show was designed to meet the ever-increasing demand for high-quality, fun, and compelling video-on-demand esports and gaming programming.

Fans can view the show and follow upcoming guests and showtimes on The Gamer Hour website and through social media including its popular Tik Tok page, (https://www.tiktok.com/@gamerhourshow).

Those interested in becoming a show sponsor for The Gamer Hour, appearing as a show guest, or investing please reach out to Esportz Network at info@esportznetwork.com.

Esportz Entertainment Corp. is located at the epicenter of esports, surrounded by hundreds of the greatest names in game development, arenas, tournament play, and those who drive the global esports industry. Esportz Entertainment Corp. through its Esportz Network, (https://www.esportznetwork.com), one of the largest global esports news organizations with over 90 reporters, photographers, videographers around the world, and a Reuters global partner for esports, is covering esports leagues, teams, athletes, along with the people and the companies behind the sport in a manner that matches the excitement and rapid global growth of esports. Esportz Network is developing additional high-quality programming directed to the broader esports /gaming audience and communities.