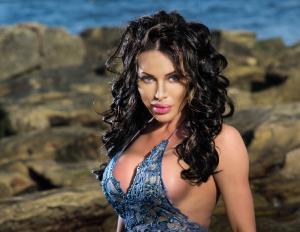 When the odds are against you go back to University, study Criminal Law and fight for justice said Lydall.

Laura Lydall rocketed to fame as a supermodel & actress after winning the ‘Miss Jetset magazine’ international model contest beating thousands of entrants from all over the World. Lydall is a former Mrs Australia, Mrs Australasia title holder beauty champion who has graced the covers of over 30 lifestyle magazines from Maxim, Playboy , FHM and Mens Health Magazine. Global print media magazines have made a fortune featuring Lydall on their covers.

National Institute of Dramatic Art ( NIDA) trained Lydall has recently featured alongside actors such as Charlie Sheen, Pamela Anderson and Belgium actor Jean-Claude Van Damme in a stint of highly paid and publicized Ultratune TV Commercials but sadly is now the latest celebrity to fall Victim of online trolls who are now being investigated by Australia’s New South Wales Police ( NSWPOL) and Australian Cyber Crime Detectives.

Lydall has been the subject of a police investigation into her online attackers who for almost a year have posted offensive and humiliating comments on all her business posts forcing her to close on cosmetic clinic during Covid lockdown restrictions in Australia where clients would book then cancel after reading the offensive comments made by Maxim entrants to the Maxims Hottest 100 Online competition 2020. Lydall back in October 2020 made an official complaint against the known offenders who’s names will be withheld for legal reasons until prosecuted. The evidence submitted was a direct violation to the Australian Criminal Code 474.17s of the Australian Telecommunication Network Act that states ‘ It is a criminal offense to use a carriage service to menace, offend, harass and stalk.

The ‘Trolls’ who went on a yearlong rampage to destroy Laura’s cosmetic business and her reputation with offensive comments on her social media to tens of thousands of her prospective clients have broken the Federal Australian Telecommunication Law said senior police officers and they will be punished to the full extent of the law. Lydall made her formal complaint on the Australian Federal Police ( AFP) website ACORN ( Australian Cyber-crime Official Reporting Network) Listing the times the alleged offenses were made and by who. The Crimes act states for severe cases a maximum jail term is 6 Years and police advised that matter was severe and worst they had seen.

The AFP contacted Uniformed Police who attended Lydall’s lavish 3 floor Penthouse in Sydney where they found her visibly distraught. Lydall has given an official statement to assist with police investigations to apprehend and charge the women under the federal Crimes Act next week. Australian Police are taking all complaints relating to Cyber Bullying serious due to the large numbers of suicides as a result of social media bullying.

If you feel you are a victim of cyber bullying talk to your local police as Ms Lydall says, ” Enough is Enough”.