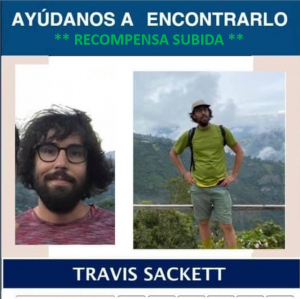 Travis disappeared on February 21, 2021 while travelling abroad in Ecuador. On the day he vanished, Travis was reportedly on his way to hike to the Imbabura Volcano in northern Ecuador.

Please share Travis’ face and story on your social media accounts so we can keep his name out there, and hopefully generate additional leads.”
— Thomas Lauth, CEO

Travis Sackett disappeared on February 21, 2021 while travelling abroad in Ecuador. Travis loves the outdoors and helping others, which made him perfectly suited to become part of the Peace Corps. While he was between missions in the Peace Corps, Travis had been living and working on a farm in Quito. In his free time, he enjoyed hiking and the outdoors. On the day he vanished, Travis was reportedly on his way to hike to the Imbabura Volcano in northern Ecuador. Though the hiking trails he would have encountered were not incredibly dangerous, there have been concerns that he could have met with some harm in the wild.

Efforts to involve law enforcement in the search for Travis have been difficult, and as a result, a great deal of time has been lost in the importance of recovering important evidence and speaking to witnesses. Lauth is hoping to implement new strategies in the search for Travis, including a multi-pronged social media awareness campaign.
Travis’ family are still waiting for answers after months with no word. You can follow Travis’ story on Facebook at the page dedicated to the case. Travis’ family has posted a GoFundMe campaign to fund the search, which has raised over $12,000 to date. Any persons in the United States who believe they have information on Travis’ last known whereabouts, please contact Lauth Investigations International at 317-951-1100 today.