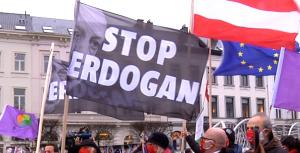 Flags being waved by protestors at a rally organised by StopErdoganNow outside the European Parliament, January 19 2021. Credit: StopErdoganNow 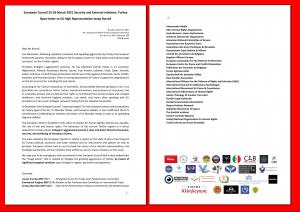 “Erdogan’s aggressions present a clear and direct threat to the peace, security, and wellbeing of European citizens. “ 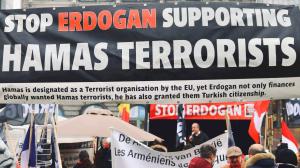 Erdogan finances and supports Islamist terrorist organisations such as ISIS and Hamas.

The Stop Erdogan coalition brings together many of those whose communities are being threatened by Erdogan’s aggressions.

Letter Signed by MEPs and 30 NGOs Calls on HR Josep Borrell to Recommend That The European Council “Imposes Tough Sanctions” on Erdogan’s Regime this Friday.

Turkey is a much worse offender than Russia concerning abusing human rights, fuelling conflict in its sphere, threatening Europe & committing war crimes. The EU must sanction Turkey as it did Russia.”
— Nicolas Tavitian, President of the Armenian Committee of Belgium

BRUSSELS, BELGIUM, March 23, 2021 /EINPresswire.com/ — Will the European Council heed the resolution of the European parliament to sanction Turkey for gross violations of human rights, or will it again do nothing?

As a response to repeated and sustained aggressions and threats against Europeans, other countries and his own people, the European parliament passed a resolution by overwhelming majority last November to “impose tough sanctions” on Turkey.

Instead of imposing sanctions, the Council postponed a decision until its meeting of this week. Many commentators put this down to national self-interest, since Germany, Spain and Italy are heavily invested in Turkey.

In protest at the weakness of this response by our European leaders, a rally was held outside the European Parliament in January, during a meeting of the parliamentary Foreign Affairs committee. Speakers included MEPs and leaders of communities directly threatened by Erdogan’s violent policies.

Loucas Fourlas MEP (EPP), a member of the Delegation to the EU-Turkey Joint Parliamentary Committee said:

“We must put our European values above any national interest. We have to decide whether we are promoting values, or business.”

“We choose not to be silent against the crimes committed by Erdogan. We must not follow the failed appeasement policy of the late 1930s towards Nazi Germany, which humanity paid with such a heavy cost.”

Yet appeasement is precisely the policy that the European Commission appears to be practising. Last week it was briefing journalists that it had “ceased work” on drawing up sanctions on Turkey because of an apparent “thaw in relations”. This so-called thaw is evident only to those with their heads in the sand. If the unelected eurocrats thought that they could get away with brushing the will of parliament to one side and acting as if Erdogan is not the danger to European peace and security that he is, then they have had a bad week.

Why? Because last Wednesday Erdogan’s apparatus threatened to ban Turkey’s third political party which attracted six million votes and stripped a prominent legislator and human rights advocate of his parliamentary seat. Instead of condemning such an outrage, EU High representative Josep Borrell merely expressed his “deep concern”. He had no difficulty, however, in condemning Russia’s expulsion of EU diplomats from Moscow. Why the double standard?

And last Friday, only hours after EU President von der Leyen and EC president Charles Michel had finished a video conference with him, Erdogan pulled Turkey out of the Istanbul Convention, the international accord designed to protect women amid rising femicide. Turkey’s record in this area is appalling, yet Borrell once again only “expressed concern” rather than calling out, criticising and condemning this latest assault on human rights. Why is he so scared to do so?

Meanwhile Erdogan’s regime continues to be responsible for, inter alia:

• unilateral provocations against EU member states Greece and Cyprus
• undertaking provocative illegal activities in the eastern Mediterranean
• destabilising military aggressions in Syria, Iraq, Libya and Nagorno-Karabakh;
• threatening European citizens that “they will not be able to walk safely on their streets”
• financing terrorist networks whose aims and values seek to destroy European liberal democracy
• supporting and granting citizenship to murderers from Hamas, outlawed by the EU as a terrorist organisation
• operating a terrorist mercenary army and transporting them via Turkish Airlines from Syria to Nagorno-Karabakh and Libya
• committing war crimes against Aramean Syriacs, Armenians, Kurds, Assyrians, Yazidis, Syrians and others
• violating human rights of journalists, political opponents, supporters of democracy, women and all voices of dissent, on an industrial scale

The response of von der Leyen and Michel is to seek “confidence building” to “allow for a more positive EU-Turkey agenda”. This is not the language of diplomacy; it is the language of capitulation. Erdogan is playing our European leaders for the weak, indecisive political amateurs that they are repeatedly confirming themselves to be.

The only language that an authoritarian ideologue such as Erdogan understands is strong actions. For that reason, we are today sending an open letter to EU High representative Borrell, signed by MEPs and our partner human rights and community organisations, demanding that he presses the European Council to “impose tough sanctions on Turkey” later this week.

The world is watching.