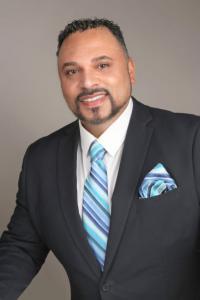 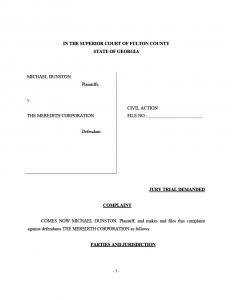 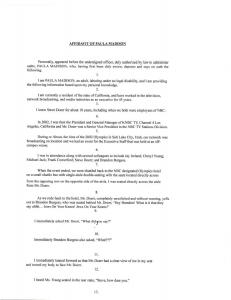 Image of Affidavit from Paula Madison

It’s imperative to send a message that racism, sexism, ageism, and other forms of discrimination should not stand; and that every human being deserves equal protection under the law…”
— Shawn McCullers, Attorney

ATLANTA, GEORGIA, UNITED STATES, April 28, 2021 /EINPresswire.com/ — The McCullers Litigation Group, LLC, recently filed a lawsuit on behalf of Black Journalist, Michael “Mike” Dunston, alleges race, sex, age discrimination, retaliation, defamation and breach of contract against Iowa-based Meredith Corporation www.meredith.com (owners of People Magazine, Better Homes & Gardens, Entertainment Weekly, InStyle, Martha Stewart Living, Magnolia Journal, Rachael Ray In Season and 17 television stations across the nation).
In an affidavit filed supporting Mr. Dunston’s lawsuit, former veteran NBC News Executive Mrs. Paula Madison recounts an extremely disturbing incident when Mr. Doerr was employed with NBC.
During the 2002 Winter Olympics in Salt Lake City, Utah on a NBC-designated small hotel shuttle bus, according to the affidavit, Mrs. Madison recounts Mr. Doerr yelling to executive Brandon Burgess: “Hey Brandon! What is it they say uhhh … “Jews On Your Knees! Jews On Your Knees!”
According to the affidavit, other executives riding on the shuttle bus were shocked and appalled by Mr. Doerr’s comments with one executive stating: “Steve, how dare you.”
It didn’t end there, according to the affidavit, Mr. Doerr continued, saying to Mrs. Madison: “Hey Paula, what’s the word for Black people?”
Mrs. Madison interjected according to the affidavit: “Steve, you don’t want to say one word about Black people.”
Mrs. Madison recalls Mr. Doerr sitting with his spouse giggling and laughing, and finally quieting down for the duration of the shuttle ride.
In the affidavit Mrs. Madison states: “As an industry executive, it would appear that the station’s (WGCL-TV) previous history with discriminatory practices was not properly addressed, in fact, likely made worse by hiring Mr. Doerr.”

Background:
The Los Angeles Times revealed allegations of racism, sexism, and harassment go much deeper than KYW-TV (Channel 3), in Philadelphia. The systemic racism, sexism, ageism, retaliation and discrimination also extends to the Meredith Corporation-owned CBS affiliate in Atlanta, Georgia, WGCL-TV CBS46.
When it comes to discrimination lawsuits and diversity complaints among its national workforce and its local anchors, the Meredith Corporation has been in the news recently and frequently:

“It’s clear that the Meredith Corporation has not ameliorated the racism among its executives from when WGCL-TV CBS46 Atlanta made headlines in 2005,” said McCullers Litigation Group founder, Shawn McCullers.
According to NBC News digital article, Kevin O’Brien, former head of Meredith’s local broadcast group said of WGCL-TV:
“We can’t right all the wrongs of the Civil War; we’ve got to quit hiring all these Black people.”
“You shouldn’t hire old Black guys. These guys don’t listen, they have attitudes, and you can’t control them.”
https://www.nbcnews.com/id/wbna7163988

Also, a current Meredith Corporation Executive, who oversees WGCL-TV CBS46, among other Meredith TV stations, allegedly made a disparaging comment about Black journalists.
According to a lawsuit brought by former KGTV-TV San Diego Anchor, Lisa Lake Campbell-Grossman, who is Black, in 2007, current Meredith Executive Gary Brown, Senior Vice-President for Content: stated to a human resources representative from McGraw-Hill’s Indianapolis station that he, “doubted he could find any real talent at the [National Association of Black Journalists Las Vegas] Convention.”
http://gruenberglaw.com/wp-content/uploads/2014/04/lisa-lake-complaint.pdf
Fast-forward to 2017, Meredith Corporation management, to include then news director of WGCL-TV CBS46, Mr. Steve Doerr, began discriminating against plaintiff, Michael “Mike” Dunston.
The discrimination started when the Emmy Award-winning Black and second-most tenured News Anchor/Reporter, at WGCL-TV/CBS46, was told by senior managers that he could not anchor because he was not a woman.
Mr. Dunston was denied several opportunities despite glowing performance appraisals and earning among some of the highest ratings at WGCL-TV CBS46.
In Mr. Dunston’s last performance review, Mr. Doerr documented:
“Mike is a steady, positive force in our organization…He is a versatile anchor who can anchor any newscast: morning, evening, or late and a solid reporter too…”

Race Discrimination Key Points (see attached lawsuit):
• Despite stellar reviews and earning among the highest ratings at the tv station, when primary anchor positions opened at WGCL-TV; Mr. Dunston was never afforded auditions or interviews, despite requesting to be considered for the open positions. When speaking with Mr. Doerr and voicing his concerns of discrimination, Mr. Doerr told Mr. Dunston, African-American males were “spoken to [not interviewed]” but they were not “good enough.”
Sex Discrimination Key Points:
• On multiple occasions, three different WGCL-TV managers discriminated against or co-signed on discriminatory practices against Mr. Dunston on the basis of sex.
• They denied the opportunity to anchor with other male co-anchors, substituting female anchors until he challenged the managers. Managers told Mr. Dunston “we want to go traditional [male/female];” “could not have all male anchors;” [he] “needs a woman to anchor;” and even mocking Dunston by laughing and stating, “do you want to wear a wig?”
Age Discrimination Key Points:
• WGCL-TV management gave younger and less experienced employees, anchor opportunities in favor over Mr. Dunston, who’s over the age of 40.

“We are keenly aware of past and present accounts, claims and concerns of discriminatory complaints current Black Meredith employees and other WGCL-TV employees of color have brought to management. We are prepared to reveal them publicly in a court of law,” said McCullers.
In his more than 25 years as a broadcast journalist, Mr. Michael “Mike” Dunston never brought legal action against anyone.
“It’s imperative to send a message that racism, sexism, ageism, and other forms of discrimination should not stand; and that every human being deserves equal protection under the law, and equality of opportunity in the workplace. Employees should not be terminated for having the courage to voice their concerns about discriminatory treatment,” McCullers said.