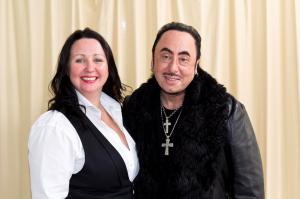 5 years after the death of Hollywood Producer David Gest, Scottish Composer Tish Tindall tells the world why she will never give up on Robert Burns The Musical.

I think the problem is that the backstory is so hard to believe. However, the facts remain; David asked me to write a new version of a musical he and Michael Jackson had produced – so I did!”
— Tish Tindall

UNITED KINGDOM, SCOTLAND, April 12, 2021 /EINPresswire.com/ — Michael Jackson, David Gest, Robert Burns, Gene Kelly, Anthony Perkins, John Barrowman and Tish who? “The first time I read that kind of statement it was in the comments section of an article in The Times; Wacko Jacko, Liza Minelli’s ex and somebody nobody has ever heard of!”

You could not make it up! Yet that’s exactly what David Gest asked Tish to do when he asked her to revamp Red Red Rose, a musical adaptation of the life and works of Scottish poet Robert Burns, which was produced by Michael Jackson and David Gest in the 1990s. Tish did that, and although various updated versions of her incarnation of the show have toured the UK, the piece has never yet made it to the big stage. Additionally, three UK based production companies have tried to produce a documentary about the project, but to date, nothing has ever come to fruition.

“I think the problem is that the backstory is so hard to believe. However, the facts remain; David asked me to write a new version of a musical he and Michael Jackson had produced – so I did!”

“Michael was a genius; Robert was a genius and there are far more similarities there than Thriller and Tam ‘o’ Shanter. David knew that, he saw the potential of a project like this and that’s why he handed it to me. He was a genius in the art of the hustle and the fact that I am relatively unknown is both bizarre and brilliant!”

The Scottish performer believes that a documentary currently in development in America will finally provide an international platform for the Scottish Show with a Hollywood History. “The older I get, the more I believe that everything happens for a reason. This musical was always meant to be, and it was always meant to be passed down to me – and as bizarre as that sounds…it’s the truth!”