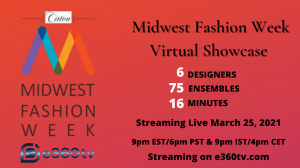 Midwest Fashion Week was founded in Indianapolis in 2006 by fashion designer Berny Martin to disrupt the fashion industry and create a platform that would bring couture … to the Midwest.”
— MIdwest Fashion Week

Six internationally-renowned designers will be showcased:

Masha Titievsky DeHaan – VARYFORM:
VARYFORM is a contemporary womenswear line designed by Masha Titievsky DeHaan in Chicago, Illinois. Her designs express change over time and the transformative nature of clothing, and are strongly influenced by nature. VARYFORM embraces a sense of glamour and sophistication, and has been recognized by Elle Magazine’s Nina Garcia and featured in TATLER Magazine, British Vogue, Vanity Fair UK, and Elle UK.

Berny Martin – Catou:
For Berny Martin, fashion designer and founder of Catou, fashion has always been a way of life. After earning a computer technology degree from Purdue University in 2002, Berny embraced fashion as his true calling and launched the Catou line of men’s and women’s professional wear in 2005.

Berny’s collection has appeared on runways all over the world and has been worn by countless celebrities including Billy Porter, Jim Parsons, Tom Payne and Lin-Manuel Miranda. Catou has been featured on L’Officiel Magazine, Vogue, BET, MTV, Fashion TV, Paper Magazine, and Berny was named the Best Menswear Designer in the Midwest by the Fashion Group International (FGI).

Danny Nguyen Couture:
Danny Nguyen’s foundation in the fashion world is rooted in humility. His journey into fashion design strated with his mother, cutting fabrics, collecting designs, and assisting with custodial chores around his mother’s shop. At his DNC (Danny Nguyen Couture) studio, Danny pursues his dream of perfecting his exquisite creations. He does not rest until his designs have reached the end of the runway.

Luis Machicao:
Luis Machicao hails from Peru and has designed attire with elegance and sophistication for 32 years. His collections are showcased in Milan, New York, and Paris, and won the Best Designer Award in 2013 at Paris Fashion Week. Machicao designs for actors, public figures, and influencers around the world. Everything he touches is imbued with a couture touch.

About Midwest Fashion Week:
Midwest Fashion Week was founded in Indianapolis in 2006 by fashion designer Berny Martin due to a strong desire to disrupt the fashion industry and create a platform that would bring couture and ready-to-wear collections from the American coasts and overseas to the Midwest.

About e360tv:
e360tv is a digital media company that includes e360tv, an on-demand viewing platform that is available 24/7 on all web-connected televisions, IOS/Android and the web. e360tv combines the latest technology, top-tier media production, independently produced content and global distribution channels to deliver top value to its audiences.