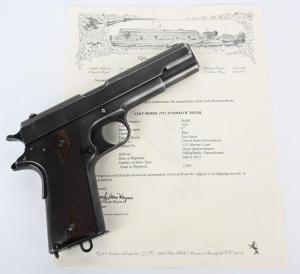 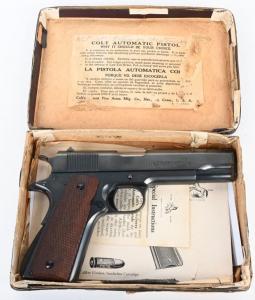 There’s a great military selection, numerous rare Colts, and many historical and collectible firearms – something to suit every type of collector.”
— Chris Sammet, Co-owner of Milestone Auctions

Approximately 770 lots will be auctioned, with many of the most popular specialty categories represented. “There’s a great military selection, numerous rare Colts, and many historical and collectible firearms – something to suit every type of collector,” said Milestone Auctions co-owner Chris Sammet.

The Colt name stands for quality and American tradition. One of the finest Colts in the sale is a high-condition .45-caliber Model 1911, one of 1,250 such pistols shipped to the US Marine Corps’ Philadelphia depot on July 9, 1913. Smooth, clean and 100% period-correct, the pistol is stamped “UNITED STATES PROPERTY” and “MODEL OF 1911 U.S. ARMY.” An accompanying document from Colt’s archival records confirms that the gun went directly from the Colt factory to the USMC Depot Quartermaster in Philadelphia. “It is rare for a Colt to be identified as having been issued directly to the USMC,” Sammet said. “Typically, documentation will say that a gun of this type was shipped to the US Government.” The example in Milestone’s auction is estimated at $12,000-$18,000.

Another Colt gem is a boxed 1st-year (1929) .38-caliber Super, arguably the most desirable of any firearm in the manufacturer’s 1911 lineup. It has a near-mint magazine and like-new bore and grips. The original instructions are included, as well as a “Special Instructions” leaflet and a May 1929 ad from American Rifleman magazine touting Colt’s new “Super.” Estimate: $10,000-$13,000

A third Colt highlight is a near-new 1st-year (1931) Colt ACE .22 caliber pistol from the pre-WWII era when Colt’s finest-quality automatic pistols were produced. This firearm has a 3-digit serial number “163” and boasts exceptionally fine condition, with more than 98% of its original pre-war blue finish intact. Rated a top-1% example of its type by Milestone specialist Tony Wilcox, it comes to auction with a $4,000-$6,000 estimate.

Rich with Old West history, a Colt .38-caliber revolver that was owned by the legendary Texas Ranger, cowboy, poker player, rancher and sheriff John Slaughter (1841-1922) comes with a fascinating archive of ephemera. The documents include a factory letter showing the gun was originally shipped to Montgomery Ward in 1904, an 1890s letter on El Paso County letterhead regarding the court case “The State of Texas vs John Slaughter,” and a 1902 letter on color letterhead depicting “Slaughter’s Herefords” (cattle). Estimate $8,000-$12,000. From an even earlier period and also estimated at $8,000-$12,000, a coveted .58-caliber Civil War Confederate rifle is marked “C.S. Richmond Va” and dated “1862.” Notably, its early “medium” hump lock was manufactured on captured machinery from the armory at Harper’s Ferry, Va.

Moving into the military section, an exceptional Mauser Banner Police Luger has “Banner” impressed on the toggle link and a small “1941” date on the chamber, as well as an Eagle “L” proof mark on both the receiver and spare magazine (non-numbered). The rig is complete, with a leather holster marked “Schambach & Co Berlin 1941” above an embossed eagle. An early war P-08 Luger and a recent discovery that has never before been offered for sale, it is estimated at $4,500-$6,500.

A top prize in the military category is a Walther World War II German K43 semiautomatic rifle, caliber 8X57, and manufactured in 1945. In extremely fine condition with matching numbers, it retains more than 97% of its original finish on its receiver, barrel, trigger assembly and bolt carrier assembly. It will convey with a ZF4 scope and a nice array of accessories. Estimate $8,000-$12,000

Those who like exotic military weapons won’t want to miss out on the chance to acquire a 7mm Japanese “Baby Nambu,” a model manufactured at the Tokyo Arsenal as a private-purchase pistol from 1903 to 1923. A diminutive pistol, the Nambu is a favorite with military firearms collectors, but the example offered by Milestone is especially desirable, as it was captured by a US naval officer during World War II. The pistol comes with a handwritten notarized statement from George Lund, Petty Officer 1st Class, US Navy, affirming that he captured the gun from a Japanese officer in the Admiralty Islands during March of 1944. This extremely rare gun has an auction estimate of $5,000-$8,000.

The auction’s firepower continues with a museum-quality Marlin Model 1893 rifle made in 1905. This 38-.55 caliber longarm is one of very few Marlins made with a special 32-inch barrel and is almost certainly one of the finest surviving rifles of its type. Estimate: $8,000-$10,000. A rare, high-condition Winchester 1890 .22-caliber long rifle was among the last of its kind to be built during WWII. A superior example in 95% or better condition, with near-mint stocks and bore, it will be offered with a $4,000-$6,000 estimate.

In a class of its own, a 1999 Judson Brennan (Delta Junction, Alaska) full-stock 37-inch .50-caliber flintlock rifle was made by the most respected of all contemporary rifle builders, using fiddleback maple stock and handcrafted brass furniture. Its carved adornments include relief scrolls and a clamshell pattern faithful to the type of decoration seen on rifles of the “golden era.” Sammet observed: “A finer rifle would be hard to find. This re-creation is truly mechanical art in its purest form.” Auction estimate: $15,000-$25,000.