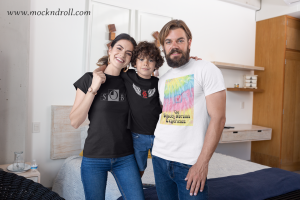 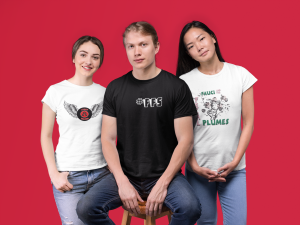 Mock n’ Droll. It’s What the Cool Kids are Doing

In the history of accolades this is among the oddest, but that doesn’t make it any less sincere. All of these people brought peace, knowledge, humor and righteous anger to me and countless others.””
— Tim Smith, CEO of Mock n’ Droll

SAN FRANCISCO, CA, UNITED STATES, April 28, 2021 /EINPresswire.com/ — There’s no getting around the fact that 2020 was a shitty year. Granted, the Black Death of 1348 was worse than COVID-19, but when you’re having a terrible, horrible, no good, very bad year it’s not a competition against other years. It just sucks.

Despite this fact, there are always rays of light in the ubiquitous gloom. Mock n’ Droll, real merchandise for fake bands, has decided to honor thirteen of the most luminescent; the people who made 2020 a wee bit more bearable. We hereby introduce the “Heroes of 2020” line of enigmawear for your entertainment.

“I’ve selected some of my favorite people from the shittiest of years and am recognizing them by creating fake bands in their honor,” said Tim Smith, CEO of Mock n’ Droll. “In the history of accolades this is among the oddest, sure, but that doesn’t make it any less sincere. All of these people brought peace, knowledge, honesty, humor and righteous anger to me and countless others.”

Alexandria Ocasio-Cortez (@AOC) is AOC SPEEDWAGON
Demonstrating decency, intelligence, compassion, humor and courage to benefit her constituents and every American, all while dealing with an attack from the daily nonsense that is Fox News. Her t-shirt is in the mail. She’s earned it!

Soledad O’Brien (@soledadobrien) is SOB
If you look up ‘truth to power’ in the imaginary dictionary in my brain, then Soledad is there spreading wisdom and naming names. No one does a better job of calling out media missteps than SOB.

Sarah Kendzior (@sarahkendzior) & Andrea Chalupa (@andreachalupa) are FOMENT OF TRUTH
Everything these two brilliant women say is true, only not enough people believe them until it’s too late. Get your act together ‘merica, and read, follow, listen, watch, and support their work.

Rob Reiner (@robreiner) & Michael McKean (@MJMcKean) are THE FOLKSMEN, LIVE AT ISLE OF LUCY
Would Mock n’ Droll even exist without two of the inventors of the mockumentary? Perish the thought. More than that, both turned their righteous anger up to 11 to criticize a corrupt and incompetent administration.

Susan Orlean (@susanorlean) is ROSÉ SUSAN & LIFE’S INFINITE TRAGEDY
In 1387 Chaucer wrote the word ‘water’ and set in motion the events of The Miller’s Tale. Similarly, on July 17, 2020 best-selling author Susan Orlean tweeted the word ‘drunk.’ In both instances, the literary world is better for it.

Jason Isbell (@JasonIsbell) is JASON AND THE ISBELLITES
To the tune of Desmond Dekker’s The Israelites.
Get up every morning tweeting some wisdom
So that the world’s a wee better place
Oh, oh oh oh oh oh oh, The Isbellites

Richard Marx (@richardmarx) is #FFS
Honestly, I couldn’t name a single Richard Marx song, but he’s one of my favorite musicians of 2020 and likely the most foul-mouthed #heroesof2020. His command of profanity in the service of truth is Nobel Prize-worthy (or is that a Grammy category?)

None of our heroes know they are being recognized and are undoubtedly going to feel (who knows, really) about having a fake band named after them. What might help is that all profits from the sale of the ‘Heroes of 2020’ line of merchandise will be donated to Fair Fight, the voting organization founded by Stacey Abrams, lead singer of THE STACEY ABRAMS EXPERIENCE. Other bands include Mark Hamill’s DEATH STAR FOR CUTIE, Elizabeth Warren’s THE WARREN RAPPORT, and DR. FAUCI AND THE FECAL PLUMES.

About Mock n’ Droll
Real merchandise for fake bands. Weird, but pretty straightforward actually. For more information, please visit www.mockndroll.com or follow the shenanigans at @MockandDroll on Twitter and @MockandDroll on Instagram.