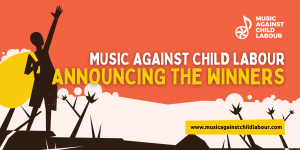 The results of the MACL Competition were announced today, during the World Day Against Child Labour event in the context of the International Labour Conference.

In 2021, the ILO, JM International (JMI) and partners organised the first-ever Music Against Child Labour competition, on the occasion of the International Year for the Elimination of Child Labour. The competition invited professional and amateur musicians to submit songs that raise awareness and encourage listeners (governments, social partners or the general public) to stand against child labour.

Running from February to May, the competition received entries by artists from over 50 countries in all regions of the world, submitting more than 200 songs.

The competition received support and was judged by the following renowned artists:

The official winners of the 2021 Music Against Child Labour competition as decided by the celebrity jury are:

Global Category Winner – Bernice, from Burkina Faso, with her song Mpa koss yé (J’ai pas demandé)
Born in 1992 in Ouagadougou, Bernice is a singer, performer and composer. As a child, she joined the youth orchestra AVM, where she took her first steps in live music at the age of 15. Self-taught, she trained herself by imitating artists she admired and composing her own songs. Her journey is strewn with karaoke competitions, singing contests and her love for music, which literally goes beyond understanding. Since 2015, she has been a member of some of the most popular bands in Ouagadougou as a vocal lead. Since then she has been coveted by international and national artists for their performances on stage.

The Celebrity Jury also selected the winners of the competition’s CLEAR Cotton category. The ILO’s CLEAR Cotton Project is active in Burkina Faso, Mali, Pakistan, and Peru. This special award category was open to national artists with songs highlighting issues concerning cotton production and its value chain. The CLEAR Cotton winners will be announced and showcased during the national World Day Against Child Labour celebrations in June.