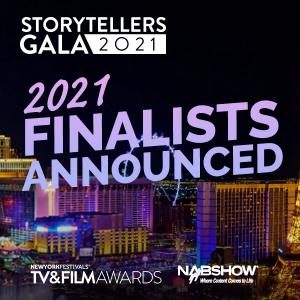 “Stories can lift our spirits, drive change, and give us hope. Storytellers explore, enlighten, enchant, and engage – make us laugh, make us cry, make us aware, and remind us we are all connected,” Rose Anderson, VP/Executive Director, New York Festivals TV & Film Awards. “This year’s finalists used their imaginations and mastery of their craft to engage their audiences in a year like no other.”

In a year dominated by a global pandemic and disruption on all fronts innovative content advanced to the medal round. 2021’s Finalists include content from around the globe in primetime entertainment, documentaries, investigative journalism, sports coverage, promos, streaming media, and brand image films.

All content submitted into the 2021 competition were judged online and screened by NYF’s TV & Film Awards Grand Jury of 200+ producers, directors, writers, and other creative media professionals from around the globe. Nominated Finalists will be judged by a panel at the United Nations for the UNDGC Awards. Award-winning entries will be showcased on the TV & Film Awards winners gallery. View all the 2021 New York Festivals TV & Film Awards Finalists: https://tvfilm.newyorkfestivals.com/.

2021’s NYF TV & Film Award winners will be announced on October 12th at the annual Storytellers gala taking place at NAB in Las Vegas. This year is the eleventh year of NYF’s strategic partnership with NAB Show, the ultimate marketplace for people passionate about media, entertainment, and technology. All winners and attendees will have access to the multi-day NAB event which is the world’s largest media entertainment marketplace taking place this October.

Entries to each of the competitions are judged around the world by panels of peers in their respective industries. For more information, go to www.newyorkfestivals.com.

About NAB Show
The 2021 NAB Show will be held October 9 – 13, with exhibits open 10 – 13 at the Las Vegas Convention Center. NAB Show is the world’s largest and most comprehensive convention encompassing the convergence of media, entertainment and technology. NAB Show is where global visionaries convene to bring content to life in new and exciting ways.
About NAB
The National Association of Broadcasters is the premier advocacy association for America’s broadcasters. NAB advances radio and television interests in legislative, regulatory and public affairs. Through advocacy, education and innovation, NAB enables broadcasters to best serve their communities, strengthen their businesses and seize new opportunities in the digital age. Learn more at www.nab.org.