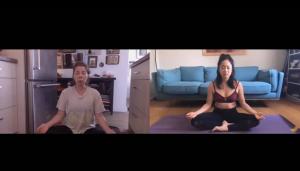 While the festival is being held in physical form for the first time, covid will still have its grip on the program”
— Dennis Cieri, festival founder

NEW YORK CITY, NEW YORK, UNITED STATES, April 28, 2021 /EINPresswire.com/ — This year’s NYC Independent Film Festival pays a lot of attention to the covid pandemic. The moment New York seems to be slowly reopening and the festival is being held in physical form for the first time, covid will still have its grip on the program.

The silence on the streets, the empty buses, the closed stores, but also: the activity inside, the busy houses, the energy that seeks for other forms of expression. The covid pandemic hit the whole world hard. And vibrant New York – the city that never sleeps – suffered extra hard from the harsh measures that were imposed to keep people safe. The city that never sleeps was suddenly silent. An alienating image that we only know from Francis Lawrence’s ‘I am Legend’, in which Will Smith tries to survive in a post-apocalyptic world.
Luckily the situation hasn’t been as extreme as in Lawrence’s science fiction drama: there’s still life in New York and with the vaccination campaign running we crawl slowly and carefully out of our hiding places.

The New York City Independent Film Festival collected all different kinds of films on this pandemic and the effects it had on our lives. Documentaries, art films, drama productions… sometimes made with very limited resources – a smart phone or a small Sony camera – with family members as actors and pets as props.
Over the time when people got more used to the pandemic and the measures around it, filmmakers dared to do more and got out to film their impressions and thoughts on the ‘new world’. It led to the most beautiful brilliant productions.

One of the most straightforward examples on the festival’s program is a film report on the pandemic in this city is the documentary COVID-19 A PORTRAIT OF NEW YORK by Duda Penteado. A portrait of the empty city through the eyes of an experienced viewer, Daily News photographer Luiz Ribeiro.
Another beautiful example is the documentary A HEAD AND A TAIL, on NYC Chinese restaurant 886 that started a donation campaign to donate food to hospitals, which turned out to be a gigantic success. Als o a great example of how big the solidarity was at the beginning of the crisis.

THE QUARANTINE MUSE, an animation by Sally Lomidze about two neighbors who have lived anonymously next to each other in New York for years and find each other in their loneliness due to the lockdown. The same happens in ROOFTOP INTERMISSION by New York filmmaker Masa Gibson, who lets two neighbors meet on the roof of their apartment complex.

It is striking that many filmmakers were inspired by the fact that during the lockdown the telephone or computer turned out to be your best friend. At least seven films at the festival have a phone call or Zoom conversation as the basis of a (new) relationship or event. In BREATHING EASY two women find each other in an online yoga lesson that brings them into a closer conversation about their life situations. Another example of that is STRAWBERRY CAKE with two friends, INTERSECTION in which six youngsters from around the world get in touch and inspire each other to new tasks or the emotional and funny CARE PACKAGE, where a drag queen comforts his sick sister. COVID A LOVE STORY is the unlikely story of two random people who fall in love after one calls the other by mistake. Unlikely sure, but isn’t such a sweet love story what we all can use in these dark days?