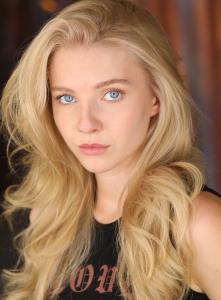 Actress Elise Luthman in Thriller Horror movies and TV in 2021

“The film (written by Duncan Forester) has been described as a cross between I Know What You Did Last Summer and Get Out. A group of privileged popular high school students commits a hate crime against Wayne, an LGBTQ student of color. They broadcast his humiliation on a major social media app for the entire world to see, driving Wayne to a mental institution. A couple of years later, they are being killed off one by one, begging the question, how far are you willing to go for likes and followers?” Josh Millican @ Dread Central.

Elise Luthman is no stranger to the horror thriller genre and brings her talents to the role of “Julie” in “Death Link”. Pamela Fisher at A3 Artists recently spoke with David Lipper. “…He and his main editor are singing your praises. He said your work is outstanding and you shine like a star, and they are talking about other upcoming projects… They will soon release an official trailer for the public.”

Luthman recently starred in the thriller: “Do Not Reply”. Her performance was described by a recent Awards Radar article.
“The best acting in the movie comes from The Politician’s Elise Luthman who portrays Heather, who is one of the girls held captive. Her performance is seasoned, not overly dramatic, and makes viewers believe she has been held hostage for three years. A scene involving cake mix makes us empathize with Heather in the way Luthman acts and delivers her lines.” Awards Radar

Her break out role as “Becky Lane” in “Dead Night” captured the hearts of viewers as she struggled to stay alive with impossible supernatural circumstances. A recent article in Cryptic Rock describes Elise: “Credit where credit is due:… of the teenagers, it is Luthman (Becky) who is given the most to work with, and she does a superb job of being a convincing, wide-eyed, sweet-spoken teen who loves her grandma, and is willing to run for her life.” Cryptic Rock

Elise is an actress, singer, musician, model, writer, producer, artist and athlete.
She is the youngest of seven thespian siblings where she learned her love of acting, singing and music as they performed together in many Community Theatre Productions. She hails from Dayton, Ohio and began her career at The Dayton Playhouse, where Rob Lowe also started. She now resides in Los Angeles with her family and sibling actor: Joey Luthman, where she acts, writes, produces, works as a mechanic on cars, and designs custom jackets with her original artwork.

Elise is accomplished and prolific in all she does. She was recently on the Netflix / Disney hit series: The Politician as “Shelley”. She recurred in Nickelodeon’s Henry Danger as “Two Canz” and Wendell and Vinnie. She can be seen in many TV series such as CSI:Crime Scene Investigation, Rules of Engagement, New Girl and Desperate Housewives that are streaming on Amazon Prime, Netflix, Hulu and more. Many of her fans recognize her as “Lea Rose” on Nickelodeon’s Deadtime Stories, as “Josephine” in the award winning film Josephine and as the lead in More Than Words which premiered at the Cannes Festival in 2013. Elise plays the young lead, “Young Julia Douglas” in the Feature Film, Play James Play, based on a true story, which premiered in 2016. She has also been a Co-Host/Producer of the TV Series: The Joey & Elise Show for 36 episodes that aired on DATV, Youtube, Blip TV and more. She is also a strong supporter of many charities, including Children’s Hospital Los Angeles, St Jude’s Research Center, The Starlight Children’s Foundation, and The LA Mission which helps the homeless of LA.