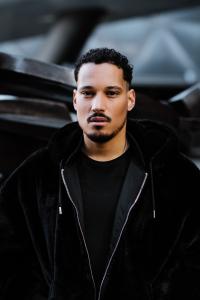 Ben first started singing when he was just a young boy. He was inspired by a TV series called Kids Incorporated, about a group of youngsters who were in a band.

Years later, he fulfilled his childhood dream and joined a band called the LA Allstars. They toured the world together performing cover songs for weddings and corporate parties.

Ben has an eclectic style that was greatly influenced by two of the biggest music stars in history, Michael Jackson and Tina Turner. His style of music is definitely within the pop genre but he tells us: “I call my music schizophrenic soulful pop, it mixes genres and reflects my mood at the time I’m writing”.

“One More Day” is a touching and intensely emotive song that was inspired by Ben’s grandma, Dorothy, who was diagnosed with Alzheimer’s disease.

The song opens and we are instantly captivated by a slow, dramatic and expansive soundscape, which is reminiscent of a Celine Dion movie soundtrack.

Ben sings with intense emotion and his breathy, raspy delivery expresses deep heartache and loss. He has an extraordinary vocal ability that carries immense character and charisma. Listeners are equally charmed and hypnotised by his passionate performance.

This is a slow-tempo track that gradually builds to an explosive chorus. It has all the makings of an unforgettable anthem and listeners won’t be able to resist joining in with the powerful chorus, as Ben sings: “what about me, what about you, what about all that we’ve been through. What do I say to turn the clock back, one more day”.

It’s no surprise that this epic track was selected as the theme song for the video game, “The Seven Chambers”. A Nintendo switch video game about a young girl called Elasaid, who falls into a coma and experiences a past life as a Highland Warrior. Her only escape is to navigate her way to the Seventh Chamber and fight the fallen angel. Take a look at the video game here: https://www.nintendo.com/games/detail/the-seven-chambers-switch/

Listeners will easily connect with this touching song and if you enjoy music from artists such as Olivia Rodrigo and The Weekend, then Ben E. Davis will fit perfectly on your pop playlist.

What’s next for Ben E. Davis?

Ben has an exciting year planned. He will be returning to performing live shows again, and he also has another single gearing up for release called “Lonely Without You”. Keep an eye out for it in July/August time. He told us: “it’s a pop/EDM summer banger and the remixes for the track are sick”.

In the meantime, Ben has a message for all his listeners: “Now it’s time to dance, party, and live life to the fullest”.