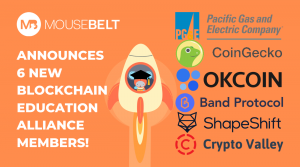 The network of industry leaders expands its membership to include utility companies, exchanges, oracles, and communities committed to blockchain education.

DENVER, CALIFORNIA, UNITED STATES, May 4, 2021 /EINPresswire.com/ — MouseBelt Blockchain Accelerator–an ecosystem for startups and students building blockchain projects–announced today it has added six new members to its Blockchain Education Alliance. The initiative, launched in October 2019 as part of their global University Program, is an effort to rally industry leaders around blockchain education and research. The alliance has now grown to not only include blockchain infrastructure companies, but enterprise companies as well. The newest round of members include the largest U.S. electric utility corporation Pacific Gas and Electric Company (PG&E), one of the largest blockchain and distributed ledger ecosystem leaders, Crypto Valley Association, as well as exchanges such as OKCoin and Shapeshift, cryptocurrency data aggregator, Coingecko, and cross-chain data oracle platform Band Protocol.

Founding members of the alliance include companies such as Mastercard, Stellar Development Foundation, Hedera Hashgraph, Binance X, Ripple’s Xpring, and ICON along with 25 other top blockchain companies. Members meet regularly with the MouseBelt team and their community of students from 100+ schools in 24 countries to develop educational and funding opportunities such as virtual workshops, hackathons, and development grants. By welcoming manufacturers, banks, and distribution centers, MouseBelt aims to accelerate the growing maturity of the blockchain industry. By bringing the internal resources, in-depth technical expertise and knowledge from these corporate innovation teams, students gain valuable skills to contribute to the ecosystem

Adam Leon, VP of Partnerships at MouseBelt says, “It’s no surprise that enterprises, even utility companies, are interested in supporting blockchain education. Through programs like ours they can source highly skilled talent, identify opportunities for innovative research, and support cutting-edge projects that will ultimately provide advanced solutions to their major internal pain points.” The initiative to add enterprise companies to the alliance is the result of MouseBelt’s efforts to provide development support to corporate innovation teams with MouseBelt Engineering. Many of these companies had experimented with blockchain through pilots, Proof-of-Concepts, and full production implementations dating back as far as 5 years. MouseBelt aims to connect these projects to students, researchers and blockchain protocols through the Blockchain Education Alliance. “Especially in a time when many students will not be returning to campus, increasing opportunities for educational experiences, jobs, and internships is of utmost importance. We’re excited these companies have decided to join us in taking the lead on that front.” said Ashlie Meredith, Head of Education at MouseBelt.

Most Recently, in an effort to deepen their commitment to collaborating with Blockchain Education Alliance members on educational opportunities, MouseBelt has partnered with the Stellar Development Foundation, to help mentor early-stage blockchain projects through MouseBelt Startup School This initiative marks the most recent development in the collaborations between SDF and the MouseBelt Blockchain Accelerator. In October 2019, SDF signed on as one of the founding members of MouseBelt’s Blockchain Education Alliance.

The Blockchain Education Alliance has also been involved in the production of the monthly REIMAGINE 2020 virtual conference series. The series of 7 events has featured over 300 interviews with 240 hours of content from speakers in 22 countries. The event live-streams non-stop for typically 72 hours and includes interviews from students at over 20+ universities and has hundreds of thousands of live viewers. BEA members offer developer focused workshops with hands-on support to viewers. MouseBelt and partners will continue to create educational content with participation from their newest members through similar monthly events continuing this summer.

About MouseBelt
MouseBelt is an ecosystem promoting blockchain innovation by supporting hands-on development for emerging projects and leaders in the industry. The leaders they support are: