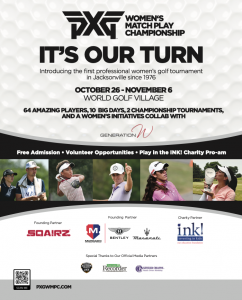 Collaborating with Generation W, the PXG Women’s Match Play Championship is a celebration of women’s initiatives on and off the golf course.

The PXG WMPC is being hosted at World Golf Village

We are thrilled to further celebrate and support women in golf with the PXG Women’s Match Play Championship creating an opportunity for these talented women to progress their career.”
— PXG founder and CEO Bob Parsons

“We are thrilled for the opportunity to further celebrate and support women in golf with our sponsorship of the PXG Women’s Match Play Championship,” PXG founder and CEO Bob Parsons said. “This highly competitive playing experience creates an exceptional opportunity for these talented women to hone their skills and fight to progress their golf career. I can’t wait to watch them play!”

Produced by MediaShare Consulting Group and On the Green Consulting, The PXG Women’s Match Play Championship is one of fourteen official events on the Women’s All Pro Tour (WAPT). The WAPT is the Official Qualifying Tour for the LPGA’s Symetra Tour, providing more opportunities for women to play professional golf and to advance their careers to the next level and offers its winners exemptions into Symetra Tour events. Said MediaShare Managing Partner, Mark D. Berman, “If the Symetra Tour is the Road to the LPGA, then events like ours and tours like WAPT and Cactus Tour are the on-ramps.” He continued, “For the past ten or so years, the industry has done an amazing job at cultivating young girls to play this great game, much of that messaging centered on playing professionally. Now those girls are coming out of college wanting to further their career. This is a passion project inspired by our personal experiences with players at this level who are looking for another path in.”

The tournament also announced COX Media Group, specifically its ActionNews programming on the CBS and FOX affiliates, will be the Official Media Partner. They will actively promote the tournament’s free admission to fans in the market. Joining also as Official Media Partners are the Jacksonville Business Journal and Ponte Vedra Recorder. Jacksonville-based, Kessler Creative is confirmed as the Official Printing Partner of the tournament, designing and producing tee signage, scoreboards, and collateral materials and providing creativity for the on-course look and feel inside the ropes.

Additionally, the tournament has designated Investing in Kids (INK!) as the event’s charitable beneficiary. A 501c3 not for profit organization, INK! raises money for notably underserved public schools in St. Johns County where World Golf Village is situated.

The PXG Women’s Match Play Championship will feature 64 female professionals who are pursuing their dream of playing on the LPGA Tour. The golfers will battle it out over two weeks in two separate, but connected, tournaments. The first week will feature a 54-hole stroke-play format on the King & Bear course, which will also seed the second week’s event, a 64-woman match play championship at Slammer & Squire. There will be no cut in the stroke-play event and all players will advance to the match play tournament. Each tournament will have its own prize purse and the winner of the match play event will also earn the title PXG Women’s Match Play Champion. In addition to the cash prize, the champion will receive the opportunity for a tour-caliber full bag fitting and equipment from PXG.

Since the company’s inception in 2014, PXG has taken a strong stance in its support of women in golf. The company lists more than a dozen exceptionally talented LPGA Tour players on its official pro roster and provides equipment to many other top-ranking female professionals. Outside the ropes, more than 20% of its global team is female, including senior level positions in marketing, manufacturing, operations, and apparel, making PXG a leader in the golf industry. As part of its Title Sponsor activation, PXG will be onsite during the event to provide Swing Sessions and fun club-in-hand experiences for players and fans alike.

Beyond tournament play, and of equal importance, the tournament will celebrate women’s initiatives by providing programming such as leadership forums, executive networking, and education. The programming is being developed and provided by Generation W, a national nonprofit founded and led by Donna Orender based in Jacksonville Beach, FL. The program’s mission embraces the guiding tenets of education, inspiration, and connection and the power of women’s leadership.

The PXG Women’s Match Championship is also a fundraiser for INK! (Investing in Kids). The INK! Charity Pro-am presented by Davidson Realty, Inc. is slated for October 25 on the King & Bear course and will feature teams of one professional player paired with three amateurs. Sherry and Jim Davidson, owners of the local development and real estate brokerage bearing their name were the original land developers of World Golf Village and have a special tie to the community and to INK!, for which Mrs. Davidson serves on its Board of Directors. The night before the Charity Pro-am will be a Meet the Players Pairings Party with a silent and live auction. The PXG Women’s Match Play Championship will also feature junior clinics and other community involvement activities for the players, who will be in the area for some 10-12 days.

Information on elevated hospitality opportunities, Pro-Am spots, tickets, key sponsorships, and volunteering is available on the tournament website at www.PXGWPC.com and by calling MediaShare Consulting Group at 904.838.4962. You may reach the Tournament Office by email at mberman@mediashareconsulting.com.