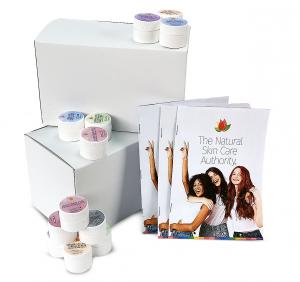 The desire is to help retailers continue to engage their customers and to keep introducing shoppers to Reviva’s affordable, effective skin care”
— Bill Levins

HADDONFIELD, NEW JERSEY, US, March 23, 2021 /EINPresswire.com/ — Reviva Labs has been a strong supporter of independent retailers since its beginning. As a family operation, Reviva understands the struggles and troubles small entrepreneurs encounter. So, it’s only natural that during tumultuous times, Reviva would desire to help out independent retailers.

The pandemic stopped in-store demos and forced shelf-based product testers to be removed. Without the ability to “sample” products, while adhering to other shopping restrictions, consumers have found it difficult to experience and experiment with new skin care products. Reviva’s new 30+30 Sampling Promotion aims to alleviate these shopping impediments through increased free product trials. The 30+30 Sampling Promotion provides thirty “free” individual use samples, along with thirty pamphlets, to help shoppers explore and learn about Reviva’s skin care.

Shoppers will be able to try Reviva’s products safely in the comfort of their own homes. “We wanted to keep shoppers excited while helping independent retailers generate good will among their customers,” said Jeri Trachtman, Reviva Labs’ VP of Sales. The promotion offers retailers the opportunity to receive free samples each time they order a minimum of two case packs of Reviva products.

Reviva paused its brand ambassador in-store demo program in mid-March 2020 and supported the removal of in-store shelf-based testers shortly after. However, as months passed, it became clear shoppers still wanted to “try before they buy.” As a result, Reviva has worked with its distributors to unveil this new free sample promotion that initially targets smaller “family businesses” and independent retailers. “The desire is to help retailers continue to engage their customers and to keep introducing shoppers to Reviva’s affordable, effective skin care,” stated Bill Levins, President of Reviva Labs.

Starting March 23rd independent retailers can qualify to receive one box of 30 samples + 30 pamphlets for every two case packs of Reviva products they purchase – up to a limit of five free 30+30 sample boxes per order. “And we’re making it retroactive to “orders” starting from March 1, 2021,”said Jeri Trachtman.

To participate in the 30+30 Sampling Promotion independent brick and mortar retailers should contact their favorite distributor sales rep or Reviva directly. The samples will ship directly from Reviva, with proof of qualifying orders. Initially, sample supplies may be limited (so early requests will receive priority). The program is scheduled to run throughout 2021 and if it proves popular, it’ll likely be expanded and extended.

About Reviva Labs
Reviva Labs formulates safe, effective natural skin care that is sold in major retailers, professional spas and salons, and health food stores nationwide and internationally. For over four decades Reviva has delivered many skin care breakthroughs and introduced new natural ingredients to the market. Reviva Labs products are free of toxic or harmful ingredients, are cruelty-free, and proudly made in the USA. Our commitment to formulating products using natural elements as well as technological advances has made Reviva a leader in the natural skin care industry.