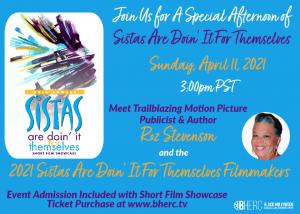 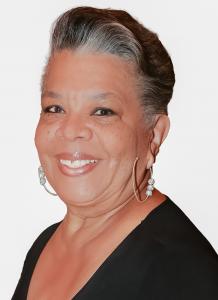 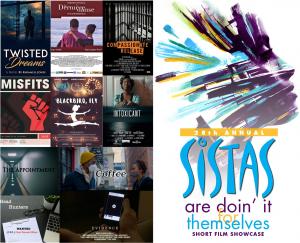 Intimate and inspirational Q and A with legendary publicist added to the closing panel discussion with the 2021 Black Women Directors of “Sistas” Film Showcase.

The community here and abroad needs to know and support our “Sister Sheroe filmmakers” as they tell our stories. This is an opportunity and a platform to do just that! To experience new voices.”
— Sandra J. Evers-Manly, President & Founder, BHERC

LOS ANGELES, CA, USA, April 9, 2021 /EINPresswire.com/ — The Black Hollywood Education and Resource Center (BHERC) announced today the addition of trailblazing and legendary publicist Roz Stevenson to the panel discussion at the closing of the BHERC 28th annual “Sistas Are Doin’ It For Themselves” Short Film Showcase, Sunday, April 11, 2021, 3:00 PM to 4:30 PM (PDT). This is the second year that the popular film showcase has streamed online on BHERC.TV due to the COVID – 19 pandemic, and continues to stream through midnight April 11, 2021. The panel is included in the admission price of the showcase register here at www.BHERC.TV.

In addition to the vital Q and A with the talented directors selected from 570 entrants this year, BHERC is excited to present what is certain to be an illuminating experience. A conversation with Roz Stevenson. As one who believes that it is never too late to pursue your passion — noting that she did not find her purpose until she was forty years old — Roz Stevenson won the hearts of celebrities, filmmakers, and studio executives. She built a solid career as a pioneering motion picture publicist whose understanding of the African American moviegoer resulted in box office gold for such classics as Breakin’, Cry Freedom, Jungle Fever, Life, The Best Man, The Hurricane, Bring It On, Fast and Furious, The Nutty Professor, Inside Man, Coach Carter, American Gangster, and Ray. After 20 years with MGM/UA and Universal, she became the President/CEO of Roz Stevenson Public Relations, launching more than 100 successful movie campaigns with Universal Pictures, Sony Pictures, Paramount Pictures, 20th Century Fox, DreamWorks, Fox Searchlight, Screen Gems, and HBO. Now retired, she lives in Los Angeles with her husband, Robert Louis Stevenson, a pioneering, and Emmy Award-winning film hairstylist.

Ms. Stevenson recently wrote and published LOOK AT GOD! MY HOLLYWOOD WALK OF FAITH an inspirational memoir about her life and career. In the book she shares what she calls her “miraculous journey” that spans four decades in the film industry, exploring from her initial struggles and failures at the bottom to her many triumphs and successes at the top. The book has been endorsed by luminaries such as Emmy Award-winning and Academy Award-nominated filmmaker, Ava DuVernay; Academy Award-nominated actor, Samuel L. Jackson, and Tony Award-nominated actor, LaTanya Richardson Jackson; the 35th President of the Academy of Motion Pictures Arts & Sciences, Cheryl Boone Isaacs; as well as Academy Award-nominated filmmaker, Lee Daniels and is available at www.esowonbookstorecom or www.rozstevensonbook.com.

The 2021 class of “Sistas” Short films explores the worlds of mental health, romance, drama, and fantasy. The films and filmmakers are:
Compassionate Release – Lynn Dow, Director, New York, NY: The tragic death of her husband has set Carol and her two daughters on an unexpected and heartbreaking journey. How will she navigate their changing lives with one who sees the world through the eyes of an elitist and the other as a defeatist.

Misfits – Ciani Rey Walker, Director, Los Angeles, CA: When two sisters and leaders of the Black Panther Party learn their friend has kidnapped a cop on the night of MLK Jr.’s assassination, they must set aside their differences to navigate one of the most turbulent nights in history.

La Dernière Danse (The Last Dance) – Fatoumata Diallo, Director, Tambacounda, Senegal:
Noor is dying and receives a visit that offers her a choice from three proposals that expire at midnight … With the help of her best friend Oumar, she gets down to it. It will change their lives forever.

Evidence – Laurie Gardiner, Director, Texas-Los Angeles, CA: While working the night shift in downtown LA, a rookie cop finds himself at a crossroads when pressured into a life-altering decision.

The Appointment – Marlena Neal, Director, Baltimore, Maryland: A short experimental film surrounding the stressors of a doctor’s appointment during COVID.Head Hunters – Cherrelle e’Lan, Director, Los Angeles, CA: Three Women Interview to Become the Next Corporate CFO, a job normally targeted toward the “ole boys network”. Only one can be chosen!

Intoxicant – Natashia Bobbitt, Director, Los Angeles, CA: Simone Hoperight, a prominent therapist battling depression from the sudden death of her newborn, seeks comfort in an activity that could cause her to lose it all. Will she regain her focus and seek help, or succumb to the comfort the drug provides her?

Coffee – Melissa Jones, Director, New York, NY: It’s a new normal Saturday in Brooklyn, with the rule six feet away from humanity. Rules are made to be broken even if it leaves you breathless. Meet two strangers

This 28th year continues an opportunity for participants around the globe to screen films online at BHERC.TV. Past “Sista” filmmakers and participants have included Gina Prince-Bythewood (Love & Basketball, Shots Fired, The Old Guard), Kasi Lemmons (Eve’s Bayou, Harriet), just to name a very few. Many of these filmmakers have received high honors and recognition for their achievements and breakthroughs in filmmaking. Screenings take place at www.BHERC.TV Saturday thru April 11, 2021, with a Q and A session with the filmmakers and Roz Stevenson on ZOOM at 3:00 PM on Sunday, April 11th, 2021. Log on to www.bherc.TV to register. Admission to the Showcase is $10.00. Please note: Access to the panel is included with the admission to the showcase. For general and festival information, please call 310-284-3170, email John Forbes at John@bherc.org, or visit the website www.BHERC.TV. For more information about BHERC log on to www.bherc.org.