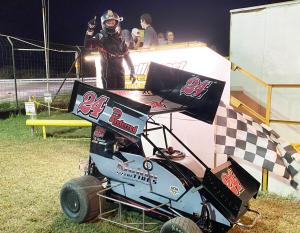 After a stellar run in the 2021 Tulsa Shootout where he finished 19th in the feature event, 14-year-old Ryder Wells, from Lumberton, TX is heading back to Oklahoma for more racing during #Sooner600Week.

LUMBERTON, TX, UNITED STATES, June 8, 2021 /EINPresswire.com/ — It will be a busy week for POWRi 600 Gulf Coast Rookie of the Year, Ryder Wells, as he battles five straight nights in the NOW600 Lucas Oil National Championship Series presented by Hi-Plains Building Division. Known as #Sooner600Week the action encompasses four tracks over five nights from June 9 through June 13. It will be the first time Wells has raced outside of Texas since his spectacular run in the Tulsa Shootout, where he finished 19th in the Restricted A-Class. It was his first-ever trip to the Tulsa Shootout and came during his rookie season as a micro sprint racer.

“I have been looking forward to this since the Tulsa Shootout,” the 14-year-old Wells said. “The thought of racing five straight nights, at 4 different tracks, against the elite micro sprint drivers/teams in the nation is pretty exciting. Going into these races and not racing for points allows me to make some gambles on decisions where some other teams cannot. This will also give me an opportunity to meet different teams in hopes to open another chapter in my racing career.

“I can’t thank my sponsors enough for helping me put our micro sprint on the track. Without the help of Preferred Contractors, Kickin’ the Tires, Universal Coin & Bullion and The Brooke Report Live, we wouldn’t have this chance. But, most importantly, I want to thank my family, especially my mom, dad, (big sister) Chaise and my grandparents, who all believed in me.”

Wells will kick off the action Wednesday, June 9 at Caney Valley Speedway in Caney, Kansas. The pits will open at 4 p.m. with hot laps getting underway at 7 p.m. Racing action is slated to start at 7:30 p.m. From there, it’s four more nights of racing in northern Oklahoma:

With the exception of Port City Raceway, the racing will be streamed live by Fast Four Media. In the Restricted Class, Wells will be racing each night for a $300 first-place prize. At the end of the week, the Speedway Hard Charger will receive $500 from Precision Collision of Russell, Kansas.

“I must stay humble and open-minded as Sooner week is against the best of the best,” Wells said. “My goal is to win at least one race and come away with a top 5 in the others but just being able to race at this level is a dream come true.”

“Now that school is out, I start adjusting my sleep schedule to stay up later for the night races. I condition my body with hydration and exercise. I have been watching a lot of track film from various locations and I have been practicing on my simulator and spending time in the shop preparing the car, backup parts, etc.”

“With all the rain we have had in Southeast Texas, it was nice to have a small vacation from racing, which allowed me to refocus and for dad and I to work on the car. We found some things we needed to fix and it’s ready to race. When I went back to the track, I picked up the win and have been back to Victory Lane two other times. Coming off of three straight wins is a big confidence booster, for sure.”

Ryder Wells is a 14-year-old high school freshman at Lumberton High School in Lumberton, Texas. When he is not racing, he plays goalie for the Houston Dynamo Dash Youth Soccer Club. This past year, Ryder received honors from the school for achieving all As and Bs despite missing a few days of school for both racing and soccer. When he is not studying or goaltending, he spends his time in the race shop learning more about setups, shocks, gearing and how the wing settings affect downforce on the car. On the night before he was leaving for #Sooner600Week, he and his dad learned the clutch was going out so they spent the entire night changing out parts to be ready to race on Wednesday in Kansas.