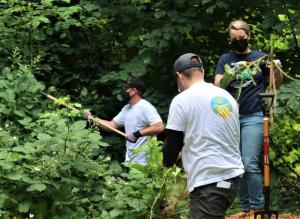 On World Environment Day 2021, volunteers from the Seattle Church of Scientology helped restore Kinnear Park by digging up and chopping out invasive species. 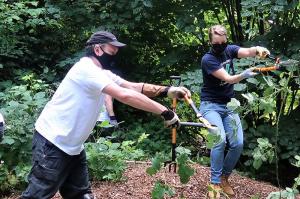 The Scientology Environmental Task Force officially adopted Kinnear Park through the Seattle Parks and Recreation program and has contributed thousands of volunteer hours to improving the park.

Over two decades ago, the Scientology Environmental Task Force officially adopted Kinnear Park through the Seattle Parks and Recreation program and has contributed thousands of volunteer hours to improving the park since that time.

On June 5, forest steward and Task Force coordinator Dave Scattergood supervised two dozen volunteers who worked to help restore the park’s natural balance by removing weeds and invasive plants near the entrance to the park so existing native plants can thrive. “As those plants continue to grow they will be better able to keep out invasive plants in the future,” said Scattergood.

The volunteers’ hard work aligned with this year’s World Environment Day theme, “Reimagine, Recreate, Restore,” and the launch of the UN Decade on Ecosystem Restoration (2021-2030).

According to the Washington Native Plant Society, “Invasive non-native plants compete with native plants in many ways including occupying space, changing the structure of the plant community, causing physical and chemical alterations of the soil, and covering and shading native plants. Invasive plants interfere with animal life too, by altering the structure of their habitat and by eliminating favored food plants through competition.” They also “hog sunlight and water, out-compete for space and nutrients, and even prevent growth and reseeding of native plants through chemical emissions.”

The Foundation and Task Force use The Way to Happiness to promote awareness of the need to care for the environment and encourage others to take part in the work of keeping Seattle green. The Way to Happiness is a nonreligious common-sense moral code written by author and humanitarian L. Ron Hubbard. One of its precepts is “Safeguard and Improve your Environment,” which states:

“There are many things one can do to help take care of the planet. They begin with the idea that one should. They progress with suggesting to others they should. Man has gotten up to the potential of destroying the planet. He must be pushed on up to the capability and actions of saving it.”

In addition to their work restoring Kinnear Park, the Task Force and Seattle’s The Way to Happiness volunteers continue their 30-year commitment to Seattle’s Adopt-a-Street program, cleaning streets near the Seattle Center throughout the year.