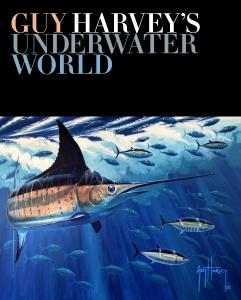 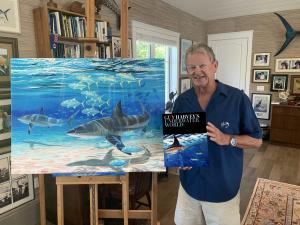 This book summarizes the greater part of our success in our research and conservation efforts and in the art business.”
— Dr. Guy Harvey

Guy Harvey’s Underwater World is available for pre-order at GuyHarvey.com, Amazon.com, Barnes & Noble and more. The book retails for $49.95 and will be released on June 1. A portion of sales benefit ocean conservation, research and education through the Guy Harvey Ocean Foundation (GHOF), a non-profit organization dedicated to saving the seas by supporting groundbreaking scientific research and helping foster the next generation of ocean conservationists through education initiatives.

Drawing from meticulous notes, knock-out photographs and signature artwork, Dr. Harvey weaves together fascinating stories, scientific discoveries and insights into the behavior of dozens of gamefish species to give us an up-close picture of his time on and in the water.

“The different destinations we’ve visited over 20 years provided so much inspiration for new art and new research projects and for the multi-disciplinary nature of the expeditions,” said Dr. Harvey. “Some locations such as the Yucatán and Panama provided constant access to a variety of species. This book summarizes the greater part of our success in our research and conservation efforts and in the art business.”

Guy Harvey’s Underwater World archives the progress, or lack thereof, of research and conservation measures that result from the commitment of time and funding. According to Dr. Harvey, it is important to give readers the true story of the scale, persistence and duration of the journey. That is something they will not see on television, in social media or blogs or through most documentaries.

“In all of the work I’ve learned to fully understand the complex nature of the life histories of large pelagic species like sharks, billfish and tunas the work has to continue for a long time, sometimes decades if necessary,” said Dr. Harvey. “I was most surprised about and disappointed by the lack of knowledge shown by the general public about the natural history of the oceans and the overall indifference demonstrated by many governments in different countries to the wellbeing and value of marine ecosystems to their sustainable economic development. We hope our work will change that.”

Dr. Harvey has been inducted into the Fishing, Swimming, and SCUBA Diving Halls of Fame. He is a trustee of the International Game Fish Association (IGFA) and his conservation work and scientific research are furthered through the Guy Harvey Research Institute (GHRI) at Nova Southeastern University. Dr. Harvey is also a signature member of the Society of Animal Artists and the Artists for Conservation, as well as an award-winner of the Academy of Underwater Arts & Sciences.

About Guy Harvey: Guy Harvey is a unique blend of artist, scientist, diver, angler, conservationist, explorer and entrepreneur, fiercely devoted to his family and his love of the sea. His childhood passion for the ocean and its living creatures not only inspired him to draw but fueled a burning interest that prompted a formal education in marine science. Having graduated with honors in Marine Biology from Aberdeen University in Scotland in 1977, Guy returned home to Jamaica to resume his education, earning his Ph.D. from the University of the West Indies in 1984. Though he gave up a budding career as a marine biologist for that of a highly acclaimed artist, Guy has continued his relentless pursuit to unravel the mysteries of the sea, traveling the world to better understand the habits and habitats of the marine wildlife he paints. For more information, please visit www.guyharvey.com.

About the Guy Harvey Ocean Foundation: The Guy Harvey Ocean Foundation (GHOF) conducts scientific research and hosts educational programs aimed at conserving the marine environment. The GHOF also funds affiliated researchers working to better understand our ocean ecosystem and educators helping to foster the next era of marine conservationists. The GHOF will help ensure that future generations can enjoy and benefit from a properly balanced ocean ecosystem. Follow the GHOF on Facebook, Twitter and Instagram at @guyharveyocean. For more information, visit www.GHOF.org.

About The Publisher: Stackpole Books is a trade book publisher with a proud, 90-year history of publishing titles in the categories of Outdoors, Crafts and Military History. Strong in Fly Fishing, Nature Guides, Civil War and World War II History, Military Reference and Specialty Crafts and Hobbies, we publish deep in our niche areas, releasing 60 new titles a year and maintaining a solid backlist of 1,500 titles. Stackpole has expanded into the world of eBooks while continuing to produce authoritative, high-quality hardcovers and trade paperbacks.
###