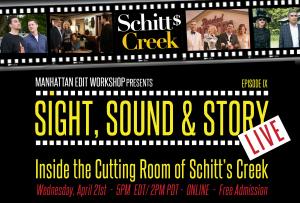 Go behind the scenes with the editors of one of the most unsuspecting hits in the history of television.

Inside Episode IX: This panel focuses on the multi-Emmy winning series, “Schitt’s Creek,” which made us laugh, cry, and captured our hearts completely at a time when we needed it most. Join author and film historian Bobbie O’Steen for a discussion with Emmy-nominated editors Trevor Ambrose and Paul Winestock, CCE. They will talk about how they helped shape and deepen the characters over time, how they crafted that delicate balance between comedy & drama, and reveal other ways that they contributed to this Canadian gem becoming one of the most surprising success stories in the history of television.

This event wouldn’t be possible without our Master Storyteller Sponsors: OWC, American Cinema Editors, & EditFest Global; as well as our Technology Sponsor: AJA. We are also grateful for the continued support of our invaluable partners ProductionHUB, Digital Cinema Society, LAPPG, NYWIFT, Film Fatales, and The D-Word. Following the panel there will be a chance to ask questions in a live Q&A session. To register, please go to https://bit.ly/3uNgBd4.

About Our Panelists:
Trevor Ambrose is a Film and Television Editor. His film work includes the critically acclaimed “Stepping Razor: Red X” (The Peter Tosh Story) and “Killing Patient Zero.”

Currently, he has the pleasure of editing New Line/Warner Bros.’ “8-Bit Christmas.” His television credits include “The Kids in the Hall,” “Saturday Night Live,” “Good God,” and “Schitt’s Creek” for which he received a 2021 Emmy nomination. Recently, Trevor had the honor of receiving his 2nd ACE EDDIE Award nomination for “Schitt’s Creek” series finale “Happy Ending.”

Bobbie O’Steen is a New York-based writer and film historian, dedicated to sharing the editor’s invisible art with students, professionals, and the movie-going public. She is an Emmy®-nominated editor and author of two acclaimed books about editing: “Cut to the Chase,” based on interviews with her late husband and colleague, legendary editor Sam O’Steen, about such landmark films as “The Graduate” and “Chinatown”; and “The Invisible Cut,” which deconstructs classic movie scenes through a cut-by-cut analysis.

Bobbie hosts an ongoing event series, “Inside the Cutting Room,” honoring editors through screening and discussion at ACE’s EditFest, as well as Emerson College, NYU, UCLA, NYIT, and 92nd St Y. She has taught at AFI, John Hopkins University, NYU’S Tisch School of the Arts, and The New School. She has also created a class series, “Making the Cut” at Manhattan Edit Workshop, where she explores the editing process, based on her interviews with over seventy editors. She contributes commentary for The Criterion Collection DVD/Blu-Ray releases and has written articles for such publications as CinemaEditor Magazine, which named her “Film Editing’s Greatest Champion.”

Her latest book is an authoritative, media-rich eBook called “Making the Cut at Pixar” about the editor’s pioneering role in computer animation. More info at www.bobbieosteen.com.

Paul Winestock, CCE, is an editor who dabbles in documentary, but primarily works in comedy and dramatic episodic programming. Paul is co-founder of the Canadian Cinema Editors (CCE), a national organization aimed at promoting the craft of editing. Paul joined “Schitt’s Creek” as it was entering its 4th season. The next 3 seasons were a highlight in Paul’s career; he is fantastically proud to have been part of a remarkable team including Dan and Eugene Levy, and Trevor, and to have been part of this landmark show.

*All speakers are subject to availability