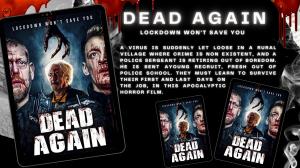 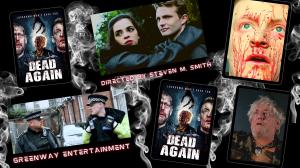 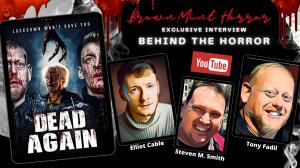 Samera Entertainment invites you for an inside look at this seriocomic gorefest.

Dead Again was a wild experience for me. Shooting a feature film in four days is no mean feat, but we pulled it off, and I think it came together pretty well!”
— Elliot Cable

LOS ANGELES, CA, USA, March 23, 2021 /EINPresswire.com/ — Now on VOD, the peaceful serenity of a rural village is shaken from its roots by swarms of the undead in Dead Again, a new horror thriller from ITN Distribution and writer/director Steven M. Smith.

Dead Again’s action takes place in the sleepy country town of Little Pitchfield, a picture perfect postcard village that’s devoid of crime and strife. It starts out as a normal day like any other. Sergeant Cooper (Tony Fadil) prepares for retirement by breaking in the fresh faced rookie, Constable Brody (Elliot Cable), who is set to take over Cooper’s beat. Soon thereafter, this nothing-burger of a day takes an abrupt turn with the arrival of hordes of infected people who are apparently zombified and have every intention of tearing this tranquil township apart. It all leads up to a final showdown of epic proportions between our two heroes and the throngs of zombies that threaten Little Pitchfield and, by association, the world.

“We all had so much fun making this film and working with so many wonderful people. Our total goal was to make a good movie and be the best we could be.” -Steven M. Smith (writer/director)

Dead Again also stars Mark Wingett, Sonera Angel, Primrose Bigwood, Jimmy ‘The Bee’ Bennett, Kit Pascoe, and Anastasia Cane. The actors had a blast on set. Everyone worked together to create a horror comedy with the spirit and attitude of modern classics such as Shaun of the Dead and Hot Fuzz. Craziest thing of all is, the shooting schedule ran for only four days!

“Dead Again was a wild experience for me. Shooting a feature film in four days is no mean feat, but we pulled it off, and I think it came together pretty well!” -Elliot Cable (Constable Brody)

For all their effort, the result is a brisk and energetic tale of bloody mayhem, with the gore and grit of the most chaotic films in the zombie subgenre.

“There’s a lot of movies out there about zombies and the undead and this and that, but I think this does an excellent job of capturing the nature of the zombies, why they do what they do.” -Tony Fadil (Sergeant Cooper)

To learn more about Dead Again, enjoy the exclusive interview from Brownmint Horror/ Behind The Horror. Click HERE

Attention bloggers, horror magazines, and freelance writers, for follow up interviews with the cast and crew, be sure to contact Sharry Flaherty of Samera Entertainment at: SameraEntertainment@Gmail.com

ABOUT GREENWAY ENTERTAINMENT
Steven M. Smith, (CEO, Greenway Entertainment Limited) began his career at 16 working on films such as Four Weddings and A Funeral, and Television like Lovejoy. He produced his first feature film Time of Her Life, which screened at Cannes in 2005 and went on to produce & direct features: Haunted, Tales of the Supernatural, Essex Boys: Law Of Survival, Hooligans At War: North Vs South, Invasion Earth, I Am Hooligan, Borstal, The Doll Master, The Howling, Red Army Hooligans.