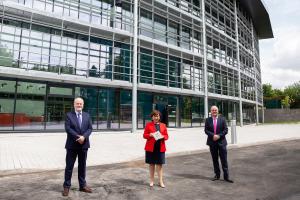 The Passive House Institute in Germany has confirmed the new building is the world’s first and largest educational, Passive House Premium rated building.

Speaking after visiting the new campus, the Minister said: “I am delighted to see the excellent progress made on this stunning new further education campus, which is an iconic new asset for South West College and the wider Enniskillen area. These accreditations represent achievement of the highest environmental standards in modern construction.

“Achievement of these highest globally recognised environmental construction standards has undoubtedly been challenging however, it will deliver significant benefits for curriculum provision, and greatly reduce building management costs. It will also further demonstrate the college and my Department’s ongoing commitment to deliver a modern, economically-focused curriculum in new, world class, state-of-the-art facilities.”

The Minister added: “This type of project aligns with the aims of my energy strategy for Northern Ireland, which is open for public consultation until the end of June, as we drive towards a net zero carbon energy sector.”

South West College Chief Executive, Michael McAlister, said: “From the earliest stages of planning, achieving sustainability and reaching the Passive House Premium standard has been central to the Erne Campus project. Achieving this accreditation is a significant milestone and one that we take great pride in.

“Renewable energy and sustainability have been at the forefront of College delivery for several years, both in terms of the curriculum we offer to students and our own construction practices. The world-class Erne Campus will deliver a unique curriculum, education and a training programme specialising in renewable energy and sustainability in a live working environment. We hope that in this way we can also advance sustainability in construction across these islands and beyond.”

Designed by Hamilton Architects and constructed by local firm Tracey Brothers Limited, the four-storey campus is fully funded by the Department for the Economy and will accommodate in excess of 800 full-time students, 2000 part-time students and 120 staff when it opens in September 2021.

“I am delighted to announce the official certification of the recently completed Erne Campus at South West College, Enniskillen, as the world’s largest Passive House ‘Premium’ educational building.

“The project sets a new standard for educational buildings across the globe in terms of energy efficiency, year-round comfort, and indoor air quality. It will act a beacon and a source of inspiration for building designers everywhere in delivering on much-needed dramatic reductions in carbon emissions from the built environment.

“It has been a great honour for the MosArt team to guide this project towards what is without doubt the most demanding energy efficiency standard on the planet. Congratulations to everyone involved, especially the leadership team at South West College who had the vision to set out on this challenging road.”

Photo Caption – Pictured at the new £30 million Erne Campus in Enniskillen to celebrate the announcement that the Campus has become the world’s first educational building to achieve Passive House Premium design status are Michael McAlister, Chief Executive, South West College, Minister for the Economy, Diane Dodds and Tomás O’Leary, Managing Director of MosArt who guided the project to achieving the certification.

1. Passive House buildings are constructed according to principles developed by the Passive House Institute in Germany and are certified through an exacting quality assurance process. They are built with meticulous attention to detail and rigorous design and construction techniques to provide a high level of occupant comfort while using very little energy for heating and cooling.
2. BREEAM certification appealed to South West College because of its desire to lead by example and to provide a legacy building underpinned by the principles of sustainable design. BREEAM informed the design process from its inception to completion. It also influenced the choice of site, the design and layout of the building, the lifecycle costs, energy and water use, health and wellbeing, pollution, transport, materials, as well as waste, ecology and management processes.
3. The consultation on the energy strategy for Northern Ireland is available at: https://www.economy-ni.gov.uk/consultations/consultation-policy-options-new-energy-strategy-northern-ireland
4. The Department may take photographs and videos at announcements and events to publicise its work. Photographs, interviews, videos or other recordings may be issued to media organisations for publicity purposes or used in promotional material, including in publications, newspapers, magazines, other print media, on television, radio and electronic media (including social media and the internet). Photographs and videos will also be stored on the Department’s internal records management system. The Department will keep the photographs and recordings for no longer than is necessary for the purposes for which they have been obtained. The Department’s Privacy Policy is available on our website.
5. Follow us on Twitter @Economy_NI http://twitter.com/economy_ni
6. For media enquiries contact the Department for the Economy Press Office at pressoffice@economy-ni.gov.uk .
7. The Executive Information Service operates an out of hours service for media enquiries only between 1800hrs and 0800hrs Monday to Friday and at weekends and public holidays. The duty press officer can be contacted on 028 9037 8110.