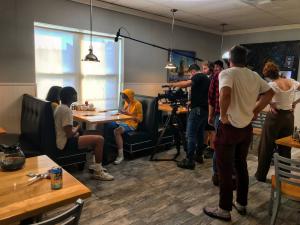 The most appealing aspect of any foreign film is when its director shows the culture and scenery of their country, and this one does in abundance.”
— Dennis Cieri, festival founder

NEW YORK CITY, NEW YORK, UNITED STATES, June 10, 2021 /EINPresswire.com/ — Those who love to indulge in good stories can head to the NYC Independent Film Festival on Saturday. You can choose from one of the three feature movies described below, but of course you can also watch all three before you dive into the nightlife of New York. It is striking how strong the narrative program is of this edition of the NYCindieFF.

THE REUNION
One of the most interesting indie features of the NYCindieFF program this year is THE REUNION, a feature movie made by director Phil Harding. Or should I say by Dave Rosenberg, who is the writer of the film, the producer and the main actor? His acting is superb by the way and so is the cinematography of the film.
At a time when what it means to be a man is being challenged, THE REUNION is a story of a “manchild”, forced to face his greatest fear, in order to discover a new definition of manhood. Rosenberg: “Around 2003, I was eating lunch at Cosi Restaurant in Union Square, NYC, when I saw a guy who had traumatized me in my childhood. I told my two best friends, Dinh Doan and Andrea Modica. Dinh said, ‘You have to write about this’ and Andrea said, ‘You have to confront this guy’. I set about doing both.” The story: Ricky Reilly, a former actor, is on a spiritual journey in Union Square Park, Manhattan with his Buddhist mentor, Danny.
The high of his newfound spirituality is shattered when Ricky sees Travis, his childhood nemesis who put him in the hospital after a fight over a girl.
When Ricky’s best friend Andy, an NYPD officer, returns from a trip overseas, he challenges Ricky to confront his nemesis at his upcoming high school reunion. The stakes are raised when Ricky falls in love with Natalie, who is with Travis. Ricky then sets off on a dark night of the soul.
THE REUNION is shown at 4 PM on Saturday afternoon at the Producer’s Club during the NYCindieFF.

APART
Set against Hong Kong’s explosive politics from the student-led Umbrella Movement the Chinese movie APART – by Hong Kong filmmaker Chitman Chan – is a beautiful film about college love, friendship, and politics. Five young students discover the harsh reality of socio-political impact on their life and relationship, as they fight through their way from seeking democracy to defending their freedom from fear. When idealism meets reality and the personal meets the political, the youngsters find they are weathering through storms of impacts on their goals and relationship in the midst of social turmoil. One of them faces opposition from his family whose business is seriously hampered by city-wide blockades, while the other becomes ever more committed to the cause. Despite their pure feelings binding them together, will the strain of their respective ties and the socio-political chaos tear them apart?
Charting some of the most vital moments in Hong Kong’s history, APART is a heartfelt family drama mixed with documentary and fictional footages that tracks the characters from their free-thinking teens into adulthood bundled with responsibilities and hesitation. The true meaning of its political storyline sometimes gets literally Lost in Translation of its subtitles, but the settings and scenes keeps its viewer on track. The most appealing aspect of any foreign film is when its director shows the culture and scenery of their country, and this one does in abundance.
APART is shown at 8 PM on Saturday night at the Producer’s Club during the NYCindieFF.

PRETENDERS
Another pick for you is the drama PRETENDERS by Queens based filmmaker Tristen Stafford. The 25 year old filmmaker created a story about Jasper and Hannah, who are two “hometown heroes” who never fully grew up. Reuniting with Nick, their childhood best friend and recent college graduate, the trio takes a road trip to Hannah’s family beach house in Maine where Hannah and Jasper come out to Nick as an item. From there things suddenly take another path. PRETENDERS is a coming of age story where each character must accept their past and figure out how to move out of their present into their future or stay the same juvenile pretender who is just a caricature of adulthood. The film does this well, is even funny, and keeps each of the trio enjoyable, realistic, and sympathetic. Although the filmmaker himself calls it a raunchy, dumb, weed comedy.
PRETENDERS is shown at 10 PM on Saturday night at the Producer’s Club during the NYCindieFF.