The Carl Kruse Blog Celebrates Love and the Anniversary of J.R.R. and Edith Tolkien

The Carl Kruse Blog Celebrates Love and the Anniversary of J.R.R. and Edith Tolkien 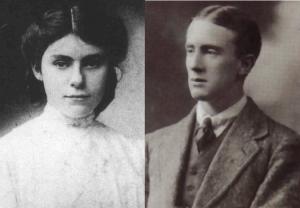 Here is to great Muses.

MIAMI, FL, USA, March 21, 2021 /EINPresswire.com/ — By now readers of the carlkruse.com blog know we have taken to celebrate certain dates and anniversaries in our own quirky way. We toast to the solstices and equinoxes, DNA Day, Bitcoin Pizza Day, the first three days of April, and on March 22 every year to the wedding anniversary of JRR and Edith Tolkien, wedded in 1916, for us, one of the great loves of history.

Tolkien met Edith when both were teens and became so enamored that he disregarded his studies and other duties. Edith was three years older than Tolkien and a Protestant, something frowned upon by the strict Catholic Father Morgan, who had become Tolkien’s guardian. When Tolkien was eighteen, Father Morgan prohibited Tolkien from talking, seeing or even corresponding with Edith until he was 21 on threat of ending his university career. Tolkien followed Morgan’s edicts to the day and then quickly proposed to Edith when he turned 21. She said yes and they were together until she died in 1971.

Edith was Tolkien’s muse and the inspiration for the Elven princesses Arwen Evenstar and Lúthien Tinúviel in his masterpiece, “Lord of the Rings.”

Tolkien crafted his literary works uncertain if anyone would care about fantastic worlds, made-up languages, or forgotten tales, but he was wrong, as he unknowingly laid the foundation for modern fantasy, escape literature and role-playing games such as Dungeons and Dragons. He captured generations of readers, all the while following his muse, Edith.

So, here’s to great muses. And to following your love. Happy anniversary to J.R.R. and Edith Tolkien.