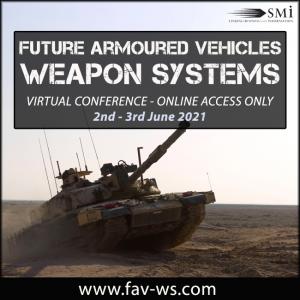 SMi Group Reports: Senior representatives from the DE&S, UK MoD and CTA International will be presenting exclusive briefings at the virtual event in June.

LONDON, LONDON, UNITED KINGDOM, March 26, 2021 /EINPresswire.com/ — Earlier in March, it was announced that the British Army could have a squadron of its new Ajax armoured fighting vehicles ready for this summer, allowing it to conduct team level training. The British Army has ordered a total of 589 vehicles across six variants, 245 will be of the Ajax variant featuring CTA International’s 40mm Cased Telescope Armament Systems (CTAS) that is also featured on the turret of the on-going Warrior Capability Sustainment Programme. *

With this in mind, SMi Group is delighted to announce that the DE&S, UK MoD and CTA international will be giving a detailed update on the integration of CTAS on the British Army’s Ajax at the virtual Future Armoured Vehicles Weapon Systems conference, taking place on the 2nd and 3rd June 2021.

Interested parties can register for the conference at £499 for military and government personnel and just £999 for commercial organisations on http://www.fav-ws.com/pr3.

Bringing together the leading industry organisations and top military nations, this year’s event will cover the latest technologies, systems and platforms that are revolutionising how military forces around the world are conducting mechanised warfare.

The full speaker line-up, brochure and agenda are available at http://www.fav-ws.com/pr3.

—— END ——
About SMi Group:
Established since 1993, the SMi Group is a global event-production company that specializes in Business-to-Business Conferences, Workshops, Masterclasses and online Communities. We create and deliver events in the Defence, Security, Energy, Utilities, Finance and Pharmaceutical industries. We pride ourselves on having access to the world’s most forward-thinking opinion leaders and visionaries, allowing us to bring our communities together to Learn, Engage, Share and Network. More information can be found at http://www.smi-online.co.uk.