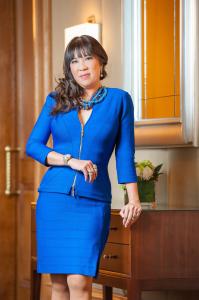 I hope to leave the women with knowledge and skills to achieve their personal objectives by dealing with the emotional aspects of personal finances.”
— Shirley Luu

DALLAS, TEXAS, UNITED STATES, April 13, 2021 /EINPresswire.com/ — Internationally renowned financial advisor and wealth guru Shirley Luu has joined the Women That Soar’s Overcomers docuseries. Overcomers is an unscripted exploration of the raw, real-life stories of minority single mothers who are facing excruciating personal and professional obstacles but have chosen to rise above their current state, overcome and soar.

The pilot follows the emotional journey of five single mothers who are seeking to overcome their grueling circumstances of abuse, poverty, fear, disappointments and hopelessness. Luu will work alongside the show’s Host and Executive Producer Gina Grant to empower participants to take control of their financial lives and equip them with the necessary tools to budget, plan and shore up their economic futures for themselves and their children. The mentors will share their knowledge, experiences and life lessons with the mothers with one goal in mind, helping them escape from the drama and trauma they have incurred and live a life filled with purpose and prosperity.

The series provides a rare look into the lives of single mothers of color, who are burdened with the task of going it alone and trying to break the cycle of poverty. The audience will be captivated by the emotional stories, and hard work that is required of the women to break free of their deep-seated past and move into a brighter future.

Each mother has made a pledge to share their true authentic story, take ownership of what led them to this place, and take on the assigned tasks. They will give their all to rise above their current situations and become stronger mentally, spiritually and physically. In the end, one mother will walk away knowing she is an Overcomer and will be gifted a fully furnished new home and fresh start towards a better life for her and her children.

With Grant’s leadership and Luu’s guidance and coaching, contestants will not only emerge from their most difficult situations, but thrive, and soar beyond their wildest dreams. “I am eager to do what I love, empower women to be financially independent,” says Luu. “I hope to leave the women with knowledge and skills to achieve their personal objectives by dealing with the emotional aspects of personal finances.” Luu’s personal journey, as a widowed mother of three facing homelessness, has allowed her to recognize the unique challenges that exist for women, front and center. Grant says she is excited to see how Luu will help cast members redefine their relationships with money and set them on the path to a more secure future, “”I am thrilled to work with Shirley and appreciative of her lending her talents to mentor our cast members.”

Luu is the Founder of Shirley Luu Financial and Shirley Luu & Associates, an author of IUL ASAP: How to Win the Financial Game of Life, Save Money, and Generate Retirement Tax-Free Income with one 3-Letter Word (a new release in April 2021) and has dedicated over 25 years to informing, educating, and empowering individuals, small and large business owners on the most powerful mediums for lifetime income and retirement. Luu’s expertise and network in the financial services field sets her apart as one of the industry’s most notable connoisseurs. She has appeared in Women of Wealth, Oprah and Forbes magazines as well as countless TV and radio interviews.

Overcomers is produced by Women That Soar in partnership with Reuben Cannon Productions and TigerEye Films. The series is executive produced by Gina Grant, CEO of Women That Soar, LLC and producer of the syndicated televised Women That Soar Awards and Legendary Hollywood Producer and Casting Director, Reuben Cannon whose credits include: Diary of a Mad Black Woman, Meet the Browns, House of Payne, The Color Purple, Get On The Bus and a multitude of additional television series and films. Producer Tricia Woodgett (Tazmanian Devil, Mahalia!) serves as producer and writer along with producer and director, Gieava Stinchcomb (Uncensored, Behind the Scenes, Being).