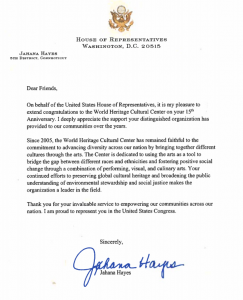 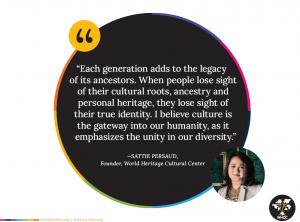 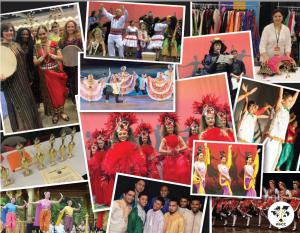 The United States House of Representatives recently recognized The World Heritage Cultural Center (WHCC) for its achievements in honor of its 15th anniversary.

I believe culture is the gateway into our Humanity, as it emphasizes the unity in our Diversity.”
— Sattie Persaud

NEW YORK, NEW YORK, USA, April 27, 2021 /EINPresswire.com/ — The United States House of Representatives recently recognized The World Heritage Cultural Center (WHCC) for its achievements in honor of its 15th anniversary. A letter from Representative Jahana Hayes, 5th District Connecticut, sent to founder Sattie Persaud praised the organization for the “support your distinguished organization has provided to our communities over the years.”

Hayes went on to note that “Since 2005, the World Heritage Cultural Center has remained faithful to the commitment to advancing diversity across our nation by bringing together different cultures through the arts. The Center is dedicated to using the arts as a tool to bridge the gap between different races and ethnicities and fostering positive social change through a combination of performing, visual, and culinary arts.” She stated that WHCC is a world leader in protecting global cultural heritage and showcasing the differences among cultures that let them shine.

Hayes thanked Persaud and the organization for their service and mission to empower the people of our nation to embrace their heritage and differences.
Based in New York, WHCC makes culture accessible through performances nationwide that feature artists in performing, visual, and culinary arts from cultures around the world. The arts are a powerful force that can be used to change society in a way where people contribute to what matters most: Humanity.

Introducing people to cultures other than their own helps them gain a global perspective and better understanding of those different from themselves. Exposing people to their own cultures helps them understand their roots better in a nation where, often, they do not have contact with others culturally like them.

WHCC has featured cultural performances from over 800 cultural groups in the United States and from around the world at over 245 concerts in its history.